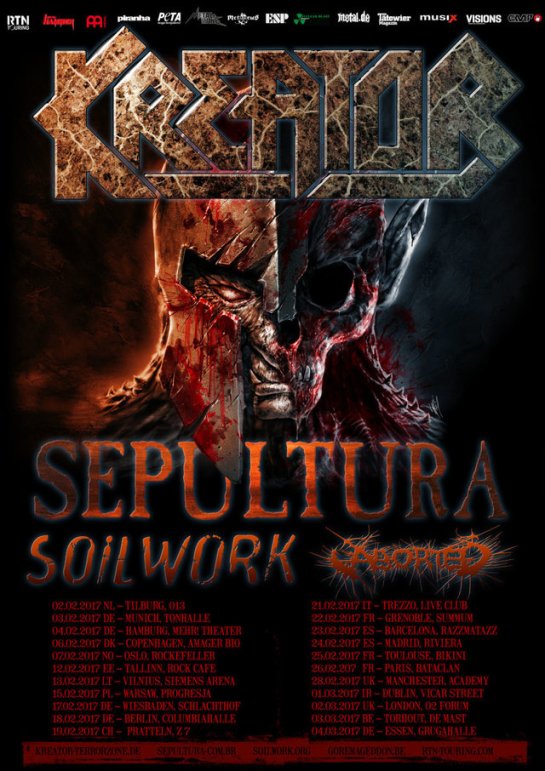 Now this is a tour! Four top-notch, high-profile metal bands in one glorious package? Yes please!

Due to the unholy start time and bad traffic I end up arriving just after Aborted finish. To say I’m disappointed is an understatement. At least I saw them last year, I suppose.

When Soilwork take the stage the Academy is probably the emptiest I’ve seen it, although to be fair it is still very early.

I’ve never seen Soilwork before, but they’re every bit as enjoyable as I was hoping they would be. For the most part at least; initially the sound they have is not the clearest and leaves the vocals relatively buried. By the second song, (Nerve), this is already improving, although it never gets quite as good as the band deserve and does tend to blunt their impact somewhat, unfortunately.

Despite this, however; as a veteran headlining band in their own right, Soilwork quickly own the stage and demonstrate a smooth professionalism from the start.

The band seem to be enjoying themselves and plenty of metal shapes are thrown. I like the easy camaraderie that they seem to share, despite their frontman’s rather imposing presence – he seems almost twice as big as the other band members.

About the time of Bastard Chain and The Living Infinite I, although the crowd is still relatively thin, parts of it begin to liven up and become a bit boisterous. There’s even a proper mini-moshpit going on. Soilwork are starting to get people moving.

They play tracks from a good range of their career, which translate into the live environment with the ease of a band that have been doing this for a long time.

Due to how polished and slick their albums generally are, I always think of Soilwork as a very ‘pristine’ kind of band. Live, although they’re still very professional, they allow a certain rougher, grittier edge to show in their music and performance, and it’s interesting to hear their songs in this context.

The final song, Stabbing the Drama, gets a bit of a singalong with the chorus. The sound seems better for this one, (typical), and Soilwork end on a high note.

Overall it’s a solid show from this Swedish metal machine. Soilwork are very good, which is the least you’d expect of a band of this calibre. I suspect that when they’re headlining in their own right and have a first-rate sound, they’re stunning.

I haven’t seen Sepultura in many years. Riding on a high with what is, for me, their best album in decades, I find myself quite excited to see them. It turns out I’m not alone. The crowd has thickened nicely and the band are treated like returning heroes when they appear on stage.

Opening with I Am the Enemy off new album Machine Messiah, it’s full speed ahead. They have both a strong clear sound and a good audience reaction from the start. The early momentum and goodwill they build never dissipates until they leave the stage an hour later.

The second song, Phantom Self, boasts a flawless delivery. It’s a great track and goes down a storm. With such a wealth of material to choose from over their rich history, this is a surprisingly diverse hour of metal. The band play everything with conviction and energy, and their set is even more enjoyable than I could have hoped for.

An extra drum is made use of for Choke, adding to the already impressive percussive noise their drummer makes, and this continues to get sporadic use throughout. Speaking of the drummer, he’s an impressive proposition in his own right, and he spends most of the show in an intense blur of limbs. In fact, a larger than normal amount of my attention is focused on him during the band’s set, so engrossing and powerful is his performance. The rest of the band don’t disappoint though, especially their man-mountain singer whose voice and stage presence are both on fine form throughout.

Although a large moshpit formed from the start, when they play Desperate Cry it really takes off. After a couple of further songs off Machine Messiah, which get a good reaction, (Alethea and Sworn Oath), the crowd really hot up once more for Inner Self.

The pit action largely continues for Resistant Parasites, one of the catchier tracks off the new album. I’m pleased that they play so much off Machine Messiah, as frequently when big, long-serving bands tour it can easily become too much of a greatest hits package for my liking, especially when they have condensed show lengths like this one tonight. Sepultura are to be commended for not falling into this trap, and it once again shows how strong their new material is.

Having said that of course, we do also love their older material too, which why the last part of their set sticks purely to some of their greatest hits. Sepultura show that they can please a crowd with ease.

Refuse/Resist nearly brings the house down. Followed by the mighty Arise, it’s thrash heaven all of a sudden. I didn’t expect them to play Ratamahatta, but they do, and I’d forgotten how good a song it is. Ending with Roots Bloody Roots, it almost seems like the entire venue explodes.

This was essentially a headlining show all of its own, and it seems barely comprehensible that shortly after this we will be treated to a full set by the mighty Kreator.

Okay then; Kreator. One of the best thrash bands to ever walk the planet. In fact, probably the actual best thrash band, ever. Certainly my favourite for a very long time now. From past experience I know they put on a blinder of a show, and I’m very pleased to report that this is exactly what they do tonight.

Considering that they’re an aggressive thrash metal band, their songs are just so danceable! I defy anyone to see them live and be able to stop themselves from moving like crazy. Admittedly there do seem to be a few people accomplishing this tonight, but I can only assume they’re dead inside…

Like Sepultura, Kreator have an extensive back catalogue to plunder, and an extra 30 minutes to do it in. Also like Sepultura, their latest album – Gods of Violence – is strong enough to support quite a few songs getting an outing, and these are then backed up with a withering greatest hits assault, playing a great selection of songs from all across the decades. And what a peerless example of thrash supremacy it is too. 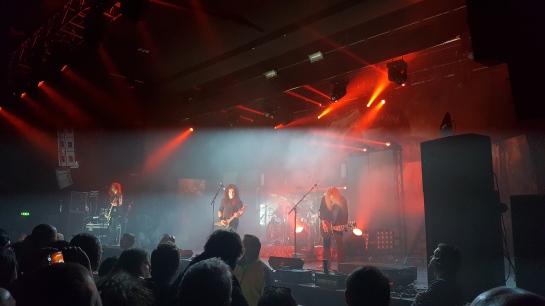 They open with Hordes of Chaos (A Necrologue for the Elite), which immediately gets everyone moving and bouncing. Phobia really sets things ablaze, with the song’s stomping rhythm getting the heart pounding loudly. The band make good use of their full stage, with different levels and smoke effects.

Video backdrops get activated during the third song, Satan Is Real. The one-two punch of this and Gods of Violence, both off their new album, ably demonstrates the strength of their latest material. In the context of their full set, it’s clear that regardless of whether the band are playing an old or new song, it all fits together perfectly and reveals a band still at the top of their game after so long.

As the next song is People of the Lie, followed by Total Death, this principle of flitting between eras with seamless ease is a wonderful thing to behold.

Phantom Antichrist is followed up another new one – Fallen Brother. Whereas the drumming captivated me during Sepultura, during Kreator’s set it’s the many guitar solos. I love a good solo and tonight’s show is full of them.

Enemy of God sounds especially colossal, and at some point somewhere in the crowd I notice an umbrella has appeared. I’m not sure if the two are related in some way or not.

From flood into Fire sees actual flames roar out from the stage, and near the front of the crowd the blast of heat is quite noticeable. Very metal. 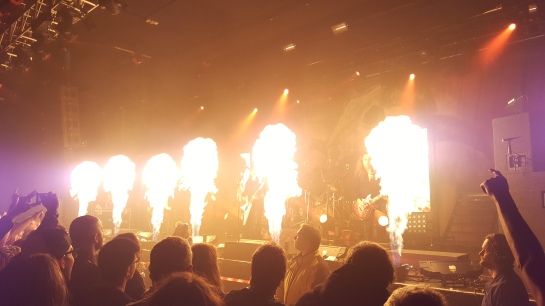 Masked drummers herald Apocalypticon and World War Now, and these extra personnel are another nice touch in the stage production. They’re only on stage for a brief time, but it still adds to Kreator’s impressive show.

Hail to the Hordes is another strong new one. Extreme Aggression is a very strong old one.

Civilization Collapse gives the crowd even more reason to go crazy, and sees an increasing number of brave souls going over the barrier and into the waiting arms of security. It also ends in fire as the band then disappear into blackness for a short while.

The brief intro of The Patriarch means we then get the ever-popular Violent Revolution when they return. What a tune! The heat of the stage fire is matched by the heat of the song.

Flag of Hate is such a classic anthem that it deserves its own flag-waving crowd-interaction. When it finally starts, it crushes. A circle pit is requested. A circle pit occurs. Nice. Flag of Hate moves without hesitation into Under the Guillotine. This is then swiftly followed by Pleasure to Kill. The relentless thrashing is impossible to resist.

By the end of Pleasure to Kill Kreator have played for almost 90 minutes, satiating the crowd with such a thrash feast it’s hard to imagine being hungry again.

A quality evening of metal. If you get the chance, make sure you catch Kreator live.