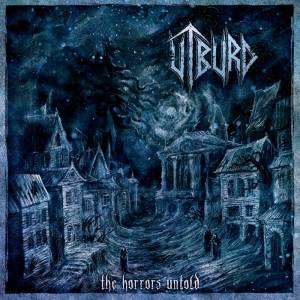 Utburd is a one man Russian black metal band and this is his second album.

Combining elements of both atmospheric and depressive black metal alongside a second wave base, this release explores the dark horrors that lurk in the night.

The singer’s harsh shrieks act as a focal point in the music, his sharp screams lacerating the airwaves with ease. Deeper vocalisations are also used for added emphasis here and there and there’s quite a lot of variety in delivery across the music. All are well-performed.

Keyboards are used sparingly, as are some quite resplendent melodies on occasion. Largely though Utburd’s black metal is cold and mysterious, fashioning itself from the ashes of the second wave era and reinforcing its core foundations with further atmospheric and depressive elements. Harsh and unforgiving, while also expansive and melodic in places, this is an album that takes from its main influences without fully embracing them.

The second wave influences are strong, featuring aspects of bands such as Cradle of Filth and Dimmu Borgir, but then these are built on by more atmospheric components that display an awareness of more contemporary acts, (Nightbringer, for example), as well as some more quirky old-school ones, (such as Ebony Lake). The depressive black metal side of the band is less obvious than the other two, but manifests in Utburd’s slower, more despondent moments.

This is quite a well-rounded and multifaceted release that takes some time to truly explore and get to know. Although it has many familiar features for fans of this sort of thing to enjoy, it also has a quirky, unconventional side that takes longer to fully appreciate.

Give this a listen and get lost in the horrors of the night.