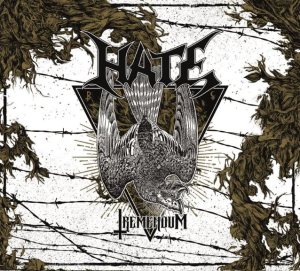 Hate are a Polish blackened death metal band and this is their tenth album.

Tremendum’s music is a mix of the old-school and the new. The former provides a purity of focus and delivery, while the latter provides polish and a sense of renewed dynamic energy.

Similarly, this is not pure straightforward death metal either, as the band visit both black metal and progressive metal territories, taking what they need in order to make their individual brand of extreme metal as compelling as possible.

This is intelligently crafted extreme metal; although there’s plenty of barbarity and punishing metal on the release, there’s also considerable evidence of the thought, care, and attention that’s been lavished on these sophisticated examples of brutality. Passion too; this comes off in the performances in waves, and adds an entire other, visceral level to the band’s delivery.

The songs on Tremendum are well-composed, showing off the band’s considerable experience as well as a vibrant sense of renewed enthusiasm and energy for their art. Blistering speed, grandeur-infused melodies, blackened ice, aggressive barbarity, mystical solos, dark growls, and quality musicianship can all be found in these tracks. The album is an extremely satisfying listen, and it’s hard to fault it in any real way.

With a clear, crisp production, the music scythes out of the speakers with deadly grace and a sinuous beauty. It seems that Hate know damn well how to best present their music, and Tremendum sounds professional and majestic.

Ten albums into their career and Hate sound arguably better than they ever have. Tremendum is tremendous.

One thought on “Hate – Tremendum (Review)”