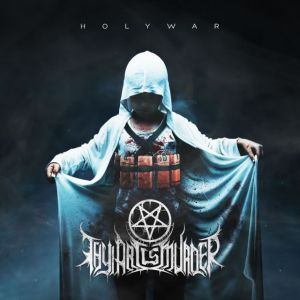 Thy Art Is Murder are from Australia and this is their third album. They play Death Metal/Deathcore.

Thy Art Is Murder have produced a mature and interesting record that brings Deathcore and Death Metal together in such a way that both styles are enriched. Deathcore, as I’ve said before, is really, really easy to do badly. With this in mind, Holy War is somewhat of a different beast to that of the Deathcore masses.

Heavy riffs and breakdowns are in attendance, make no mistake, but the more Death Metal side of things ensure there’s enough straight-ahead brutality on display to please the most virulent Metal maniac.

More interestingly, however, are the Post-Metal and Black Metal influences. “What?”, I hear you ask? Well, these are not the biggest part of their sound, admittedly, but they’re an important component of the songs here as these two influences help raise Holy War up from an enjoyably brutal listen to an enjoyably brutal listen that has more to offer than is normal for the style.

The Post-Metal influence shows in the melodies. Alongside the blast beats and the chugging beat downs are the occasional transcendently resplendent melodies, which are not normally associated with Extreme Metal of any kind, unless you’re the likes of Fallujah, of course.

The Black Metal influence is more subtle, more subversive than the Post-Metal element. This manifests itself through some of the riffs, lending a Blackened bite and atmosphere to the proceedings where another band might go for un-emotive blandness.

Both of these influences are second to the Death Metal/Deathcore side of the band, of course, and ultimately Holy War is an aggressively heavy and nastily brutal listen that takes no prisoners and expects nothing but total domination.

I have yet to mention the vocals. Suffice to say that the singer positively roars his way through these 40 minutes like a man possessed by an urge to kill everything possible. Supplemented with higher screams, his performance cannot be faulted.

In a world where Deathcore is ruled by a handful of top quality bands who oversee a multitude of mediocre ones, Thy Art Is Murder have definitely ascended to the upper echelons of Deathcore royalty. Like most Deathcore bands, they’ve achieved this through a combination of good songwriting skills and by moving away from the core of the genre itself, (pun intended), and into more individual waters.