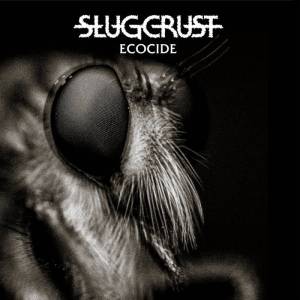 This is the debut album from US grindcore band Slugcrust.

Containing two members of WVRM, Ecocide contains 22 minutes of mayhem and carnage, the way they used to make it, but rarely do anymore. Well, Slugcrust do, and they do it very well.

This is a classic form of grind that takes elements of sludge, hardcore, death metal, and crust and forges an album of naked hostility and confident violence. Slugcrust’s approach is old-school and passionate. Sometimes considered, sometimes manic, always intense, Ecocide is an album of rich pickings for fans of grindcore.

The short and nasty songs are powered by furious drumming that sounds urgent and organic. Slugcrust like their speed and aggression, (as they should being a grindcore band), but Ecocide is not simply about speed. The band vary their assault, taking the time for slower apocalyptic passages and mid-paced heaviness amidst the general grinding carnage.

The band’s different influences come to the fore at different times. Sometimes this might entail vicious d-beats that slice like a rusty knife through flesh. At other times a Sick of It All-esque hardcore groove might come to the fore. At others still merciless deathgrind is unleashed, laying waste to everything. Occasionally crushing sludge heaviness simply devastates. The short nature of the tracks means that Slugcrust get to play around with the various styles available to them, doing what they feel is best to cause the most damage as they rip through the running time.