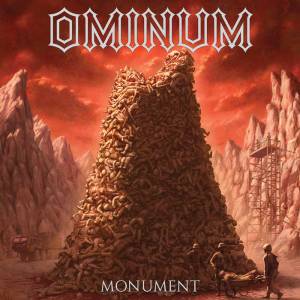 This is the debut album from Swedish thrashers Ominum.

Featuring members of Sonic Assault, Monument contains 56 minutes of face ripping thrash metal. Ominum operate on the heavier end of the thrash spectrum, with an emphasis on crushing guitars, harsh vocals, and biting extremity, but without stepping too far into extreme metal waters.

Ominum’s thrash metal has an old-school heart that’s healthy, powerful, and strong. The band take thrash and death metal influences from the 80s and 90s and combine them with a contemporary delivery, spikey heaviness, and crunchy production. Despite some modern elements, Monument is more old-school than it isn’t, and the band clearly know their thrash roots well. There are also some killer riffs on here.

The songs on Monument are typically on the longer side for the style, expanding outwards to visit a few different thrash locales. The songs contain jagged thrash riffs and aggressive speed, as you would expect, but there’s more than that here. As a simplistic description I’d suggest that early Sepultura‘s ruthless aggression combined with the ability of a band like Metallica to paint a vivid thrash landscape wouldn’t be too far removed from what Ominum get up to on Monument. Throw in some bits of Anthrax and Testament alongside this and you’ll be on the right lines for sure.

Some parts of the music have a progressive edge that allows the band to explore different moods and feelings, shaped by expressive guitars, rumbling bass, and rock solid drumming. Although the band aren’t hugely melodic, there are some leads, and solos especially, that show off what the band’s sense of melody is capable of. The singer’s gruff grunts are hostile and rough, and he sounds like he’s taking no prisoners.

Monument is a solid album of thrash metal aggression and worldbuilding. There’s a lot of discover here, and the band approach their art with skill and confidence.

A recommended listen for anyone that enjoys old-school thrash.