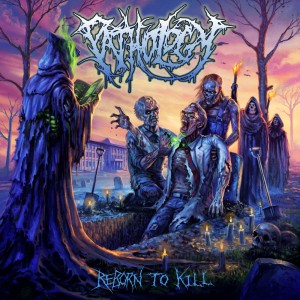 Pathology are a US death metal band and this is their tenth album.

Pathology have had a new lineup since 2017’s self titled album, including a guitarist from Condemned and vocalist from Inherit Disease. The songs are short and vicious, and the entire album is done in 33 minutes of grooving heaviness and nasty brutality.

This is brutal death metal, with slamming grooves and ferocious blast beats. In many ways you know exactly what you’ll be getting into with Reborn to Kill before you even listen to it. However, there’s still enough personality here to make visiting Pathology’s world worthwhile, and the band have actually impressed and surprised me with this album, as there’s more to this release than your typical slam-fest.

Overall Reborn to Kill is less of a slam album than its predecessor, (although still is obviously of that genre), and uses more classic death metal elements to get across its barbaric points. Two songs in particular highlight this nicely, although they’re certainly not the only ones. Around the middle of the album we get Dragged into the Cave, which I especially like as the song is partially powered by an almost-thrash riff, at least in places. Fast-paced and a combination of spiky and chunky, it’s a fine example of Pathology’s brutality. The next song, Pit of Bones, has a similar delivery, and is also really strong.

I like the occasional melodies and solos that appear here and there, adding character and depth. The Beast Within is a good example of this, where the rhythm guitars slow, while a wailing guitar shoots out over he top; it lasts a matter of seconds, but enriches the song with its presence. This song is also a good example, prior to this moment, of more atmospheric guitar parts being used too. Note should also be taken of Crematorium Flames, with its bass-heavy atmospheric mid-section. Top stuff.

Other songs have similar moments to these dotted around – classic death metal, atmosphere-building mood, melodic colour, etc. I find that these simply enhance the general quality of Reborn to Kill, as it provides something additional for the listener to enjoy, without detracting from the essential slamming brutality of the main delivery. I’ll also mention The Druid’s Gavel here, which is basically an old-school death metal song dressed up in Pathology’s modern brutality. The album ends with Celestial Condemnation, a song that kind of acts as a microcosm for the album as a whole, containing most of the above elements in one form or another. As such, it’s one of the strongest tracks here.

Barbed with spiked riffs and propelled by churning rhythms, Pathology have created an album of surprising depth and character. I enjoyed their previous outing, but this one is superior in every way.