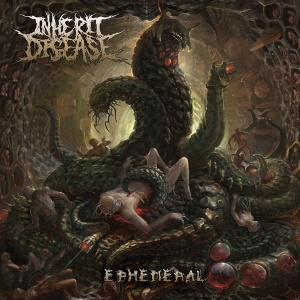 Inherit Disease are a US Death Metal band. This is their third album.

Combining some technicality and lots of brutality, Inherit Disease play a classic USDM style that allows them to showcase their love of the genre and all things brutal.

The singer’s vocals are sickeningly deep, stopping just short of descending into the kind of ridiculous pignoise burping that tends to ruin bands. His voice is as ugly and as gruesome as the music.

Ephemeral is unrelenting and harsh, rarely stopping for breath as it chops, hacks and carves its way through the tracks. There’s something very satisfying about this kind of music. It’s just so timelessly appealing; despite what other musical trends and moods might take you, Death Metal will always be there. Waiting. Lurking. Ready to strike.

I like that the more you listen to this, the more you enjoy it. It’s an unstoppable juggernaut of groove and blasting, easily absorbed by anyone who has a taste for bands like Deeds of Flesh, Suffocation, Cannibal Corpse, Severe Torture, Dying Fetus, Defeated Sanity, etc.

For a solid fix of heavy brutality and death-dealing, Inherit Disease have got you covered.