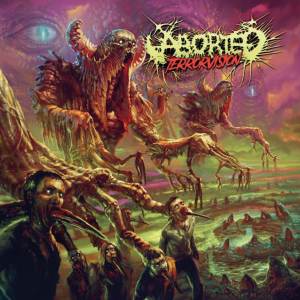 Aborted are a death metal band from Belgium and this is their tenth album.

Aborted are one of my favourite death metal bands. Their combination of utter brutality, sickeningly groovy riffs, very charismatic vocals, and memorable songwriting has taken them far and wide over the years. Although some of their output has varied in quality, they always deliver the goods in one way or another.

The band’s last album – Retrogore – was very strong. After last year’s stopgap EP Bathos, the band have now returned with the 45 minutes of utter carnage that is Terrorvision.

Terrorvision is packed with the kind of quality death metal that balances precise savage sophistication and base brutality with seeming ease. It’s obviously been well-considered and thought out, but comes across as an effortless display of ferocious aggression and cutting heaviness. Aborted know how to write and deliver a good death metal song, and have plenty of character and personality all of their own to achieve this with skill and bloody flair.

After all of the decades they have been pumping out muscular death metal tunage, the band still sound passionate and enthusiastic on these latest songs. Driven by a love of death metal and a desire to see it done justice, the band’s music is satisfying and enjoyable in the way that sometimes only the best death metal can be.

The band’s intensity is on top form, with punishing blast beats and crushing riffs everywhere. Their melodic and atmospheric aspects haven’t been neglected though, and there’s plenty of meat in these songs to sink your rotten teeth into. Catchiness has always been an important part of Aborted’s sound, sometimes to either a greater or lesser extent, but on their tenth album this has been brought to the fore. This manifests not only in the music itself, but also in the impressive and distinctive vocal style and performance of their notable singer. The man can roar.

Terrorvision is a definite winner.

Production-wise, Aborted sound as huge as ever. The songwriting is first rate, and the vocals horrifyingly immense. What are you waiting for? Get covered in Terrorvision.