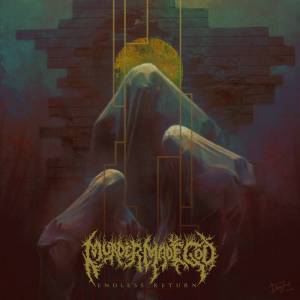 This is the third album from Greek death metallers Murder Made God.

Here we have 40 minutes of modern death metal, providing a sound that’s meaty and professional. Well-delivered and well-written, Endless Return is an album that impresses on first exposure, but definitely grows on you over time as its more obvious aggressive qualities give way to refined brutality and studied heaviness.

Ferocity is offset with a more considered approach, making for an album that is worth revisiting and listening to more than to simply get your death metal fix. This is something that’s lacking in a lot of modern death metal, so it’s good to hear it here. Brutality is a given with something like this, but this is tempered with elements that recall an older era of death metal. Endless Return isn’t an old-school death metal album by any means, but the band have clearly learned some songwriting tricks from the classic greats.

Chunky riffs groove and pummel, while the occasional technical flourish adds flavour. The music is punchy and direct, but the more atmospheric elements add some needed longevity. I feel the urge to once again praise this; balancing deathly brutality with grim melody and atmospheric distortion is tricky, and then forging this into enjoyable, memorable songs is even more difficult, but Murder Made God have done it here.

Mix together elements of bands such as Decapitated, Rivers of Nihil, Aborted, Morbid Angel, and Hour of Penance, and you’ll have a rough idea of what Endless Return sounds like. Murder Made God have their own identity, however, and this album showcases it very well indeed.

Murder Made God have produced an album of surprising depth and quality. Make sure you give this a few listens to truly sink in, it’s worth it.

One thought on “Murder Made God – Endless Return (Review)”