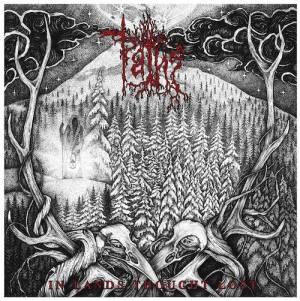 This is the third album from Paths, a Canadian black metal band.

Paths is a one man project aided by a session drummer, (from Panopticon). Together they play Scandinavian-influenced atmospheric black metal. For fans of this kind of thing, I have to say that In Lands Thought Lost is definitely above the average, and should be sought out at the earliest opportunity.

Raw blasting second wave hatred is mixed with Cascadian-style elements to create songs that are lengthy and compelling. Both styles are effortlessly combined in the music, with certain sections seeing one in ascendance, while in others the opposite is true.

There’s good variety of delivery, with different paces set throughout. The structuring of the songs is effective and has obviously been well-considered. The music on this release combines a certain amount of in-your-face instant appeal, with a longer-lasting depth and substance that’s impressive.

Richly melodic leads are merged with the darker rhythm guitars to craft impressive soundscapes that are full of blackened mood and feeling. Some of these guitar parts in particular are quite captivating, and In Lands Thought Lost is full of very well-written material.

Soft introspective moments, additional synths, and psychedelic explorations are all included in the music. These occasional aspects of Paths’ music definitely enhance the rest of the songs’ content, and there’s a lot of exceptional material spread out over the album’s 48-minute playing time.

The singer’s voice is acidic and sharp, which is precisely the style I favour for this kind of release. Coupled with the high quality music, and enriched by a clear and crisp, yet suitably underground production, In Lands Thought Lost is a very strong album.

One thought on “Paths – In Lands Thought Lost (Review)”