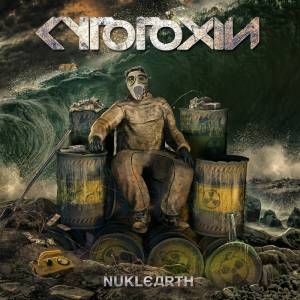 Cytotoxin are a German death metal band and this is their fourth album.

This is my first encounter with nuclear disaster-themed death metallers Cytotoxin, and it’s an extremely satisfying one. Across 44 minutes of material, the band demonstrate that they’re very capable purveyors of technical brutality. Imagine a mix of Aborted, Archspire, Omophagia, and The Faceless and you’ll be on the right lines.

Although Cytotoxin can clearly play, they’re not afraid of a bit of brutal simplicity when the need arises. This means we get some crushingly heavy guitars amidst more complex structures and arrangements. Cytotoxin’s technical aggression is very engaging, providing enough technicality to add depth to the songs, while keeping things straightforward enough to avoid becoming inaccessible or impenetrable. This is ultimately achieved via good songwriting, making for a collection of tracks that is an enjoyable experience for fans of intricate brutality.

Sprinkled across the album are striking uses of melody. These melodic parts are very well-placed, adding an emotive component to music that might otherwise be to cold and heartless. As it is, layers of bright leads and solos pepper the album, and they are a joy to listen to. There are also a surprising amount of hooks on Nuklearth too, some of which come from the melodic elements, and some of which do not. Either way, it’s a further commendation for the band’s songwriting skills.

Nuklearth is a well-rounded and very satisfying hunk of death metal. Well-written, played with skill, and effortlessly engaging, Nuklearth is very highly recommended for any modern death metal fan.

One thought on “Cytotoxin – Nuklearth (Review)”