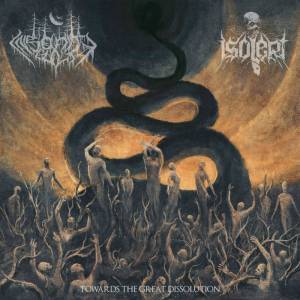 This is a split between Greek black metallers Insanity Cult and Isolert.

Starting off with Insanity Cult – who we know from 2015’s As My End Unfolds… – the split gets off to a strong start with Thorns of Solitude, which is five minutes of raw, traditional, second wave-influenced black metal.

Full of frenzied screaming, malignant riffs, and blackened moods, it’s a very enjoyable song and a fitting opener for this release. I particularly like the middle section of the song, with its mid-paced groove, anguished screams, and mournful lead guitar.

The band close their side of the split with the ten minute long Existential Entropy. This opens with frozen blast beats and icy melodies, alongside some typically unhinged screams. Like a more energetic and elongated version of the opening track, the song remains upbeat throughout, with the exception of a brief interlude near the latter half of the song where everything turns to the sounds of rain and a soft guitar, before blasting with burning aggression once more.

A satisfying dish of traditional blackened hatred, this split is another first-rate example of how effective and enjoyable Insanity Cult’s brand of black metal is.

After that, it’s Isolert’s time to show what they can do. The material they offer is just as enjoyable as that of Isolated Soul and No Hope, No Light…Only Death; Scandanavian-influenced black metal, well-written and delivered with passion and venom.

The first track on Isolert’s side of the split is called Dreams of Emptiness, which demonstrates their ample skills. Similiar in style and tone to Insanity Cult, Isolert however have less-frenzied vocals, (albeit ones that are still quite rabid), and probably more of a melodic edge. It’s a great example of how two bands can play a very similar style, yet still be recognisable as their own entities in their own right.

The band’s final song of the two is the seven minute I Hide My Soul Inside the Trees. This is probably my favourite out of the two of theirs, with a marching blackened groove and a vocal performance that’s very impassioned and fiery. There’s a good guitar solo near the end too.

This is a very enjoyable split release from two black metal bands that I both highly rate. As such, it’s not to be missed by anyone looking for a hit of the blackened good stuff.