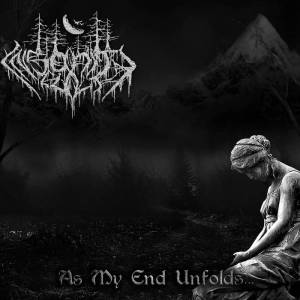 Insanity Cult are a black metal band from Greece and this is their debut album.

This is raw, underground black metal filled with negative energy. The album has a melancholic feel that spills over to full-blown depressive black metal on occasion, although they’re not fully embedded in this particular sub-genre.

Frosted black metal riffs rendered out of distorted blackened malice power the songs along. The drums provide the appropriate backdrop and have a satisfying thud to them. The band know how to pace themselves too, with a mix of slower delivery and mid-paced-to-fast approaches used, allowing for the effective build-up of mood and atmosphere.

A decent amount of blackened melodies seep out of the guitars, adding texture and emotive content to the playing. These leads accompany the darker rhythm guitars in a symbiotic way, enhancing and feeding off the cold distortion. The depressive elements allow the band room to play around with some non-orthodox influences too, which adds further aspects to their music which might otherwise be absent.

The songs are well-written and enjoyable examples of underground black metal; coupled with a traditional kind of recording for this sort of thing, As My End Unfolds… is a very pleasing listen. You can almost taste the hate-filled despair that rolls off the music in waves…

Across the album we have some vocal variety too. Grim screaming is the main mode of attack, but alongside these there are occasionally growls, spoken word parts and clean vocals. Most of the time it’s traditional blackened screams all of the way though.

I thoroughly enjoyed this. For a hit of emotive blackened venom with a good helping depressive content, check out Insanity Cult.

2 thoughts on “Insanity Cult – As My End Unfolds… (Review)”