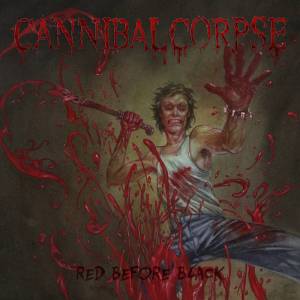 Cannibal Corpse are a legendary death metal band, and I’m pretty sure you don’t need any introduction to them.

The kings of death metal return with their 14th album. This is the follow up to 2014’s A Skeletal Domain, and features twelve brand new slabs of unstoppable brutality.

Cannibal Corpse have never released a bad album, and Red Before Black is certainly no exception to this rule. Whereas some bands of this status and stature might potentially feel the urge to soften their approach or incorporate newer, more experimental elements, Cannibal Corpse are completely comfortable in their ripped, bloody skins, and Red Before Black is just as savagely aggressive and brutal as you would hope and expect.

In fact, it could be argued that this latest release goes even further in that direction in some ways. The songs continue to be well-carved slices of carnage, full of the band’s trademark blend of catchiness and devastation, but it’s possible that they’ve injected even more energetic aggression than they normally do in some places. This certainly doesn’t sound like a band that have been around for almost 30 years and are on their 14th album. The band sound as fresh and vigorous as ever. Corpse-fresh, of course…

The relentlessly heavy assault never lets up from the first moment you press play, but that doesn’t mean that it’s all blast beats and speed, of course. Yes, there’s plenty of that, but there are also slower crushers and mid-paced bruisers here too. However they set out to batter you, they succeed, and this is yet again a worthy selection of songs, firmly upholding the band’s reputation for high quality butchery, while still entertaining in that specific way that only Cannibal Corpse sometimes can. After all, many have tried to imitate this band, but none really have. In the over-crowded realms of death metal, Cannibal Corpse essentially stand alone and sound exactly like themselves.

Every Cannibal Corpse album sounds like Cannibal Corpse, (obviously), but each one also has its own character and flavour. Red Before Black has a certain rawness and direct approach to it that’s very endearing, (although the production is just as heavy and muscular as you’d want). Some of the riffs sound a bit spikier and more jagged, and there’s certainly an energetic vitality around the guitars.