Vomitile’s third album Pure Eternal Hate brings the death metal – hard, fast, and heavy. There’s no messing around on this release. If you like your death metal relentlessly brutal and delivered with thunderous intensity and groove, Vomitile are the band for you. I like how the band effortlessly combine punishing riffs and drums that drop like bombs, with a decent sense of songwriting and catchiness. Yep, Pure Eternal Hate is on high rotation here at Wonderbox Metal.

Introduce us to Vomitile – how did you form?

The band was formed back in the summer of 2007 by Panos Larkou and George Hadjimanolis (our first vocalist) under the name Cannibal Bleeding with the sole intention of playing an extreme form of metal as it was something that they loved and something that was missing from the metal scene in Cyprus. A couple of months later I joined the band and by the end of that year we gave our first live show. Slowly the concept ended up leaning more towards death metal with the influence of thrash metal always and to this day being very evident. As the years passed by, we had some lineup changes with also an EP and one full length album and shortly after the release of our first full length album we had our final and major lineup change where I took on the duty of vocals. Since 2013 we released two more full length albums with the most recent being ‘Pure Eternal Hate’ that has been out via Satanath Records and Hetacombe Records since April 18, co headlined a European tour with Master (USA) and supported giants like Obituary, Vader, Sodom and Kreator.

Besides those I can’t really say I listened to something recently that I could recommend. Well, ‘Pure Eternal Hate’ as well of course, hehehe.

Tell us about your latest release

‘Pure Eternal Hate’ was released on April 18th by Satanath and Hetacombe Records and consists of 10 straightforward, in your face, pure death fucking metal tracks. Although the album is more or less on the speedy side it has 3-4 songs more on the mid to slow tempo side that makes you wanna bang your head to it like a good old heavy ass riff.

In general the album brings out a great nostalgic feeling of the early to mid 90s death metal releases which we are so fond of.

What’s the process you use for writing your songs?

The basic idea of the songs are written individually by Panos, George and I, and once the basic riff and structure is there we continue and finish the songs with our drummer Hugo and try to put the finishing touches by all of us.

Very rarely we add any post-production stuff in the studio as it would not reflect the live aspect of both the songs and the band. 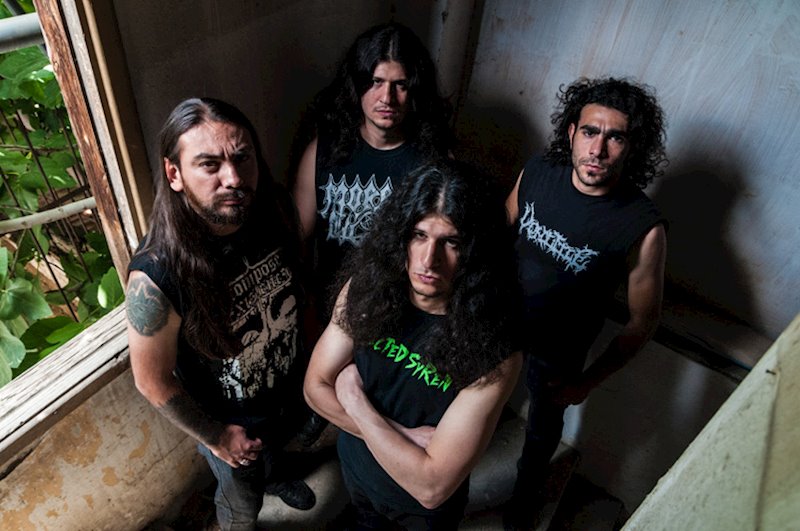 What are some of the lyrical themes on the album about?

Like the previous album we concentrate on subjects like war, gore, hate, struggle for sanity and sometimes serial killer patterned murders.

That’s something that only time will tell however I don’t think it will change much, we’re better off changing our name if the core and basic beliefs of the band change. We’re definitely going to try new things but we will certainly not shift from the genre of death metal as that’s what we love to play and that’s what Vomitile stands for.

This album had its ups and downs as we were extremely busy with our daytime jobs and the fact that the studio was almost 2 hours away drive from our city. With persistence and hard work it finally came to an end almost a year after we first entered the studio.

If you had to do it over again, would you change anything?

Not really, that’s what we wanted and that’s we ended up with thankfully.

It was tough deciding the order since were the composers of the songs and not the listeners.

We tried to see it that way meaning as listeners and ended up with this order.

Basically trying to make the album flow evenly with those mid to slow tempo songs in between the ripping fast songs.

On the previous album we worked with the same artist who is a personal friend and former band mate with our drummer when he was in Mexico and since we were happy with his previous work it was natural for us to work with him again. We gave him the basic idea, music, and lyrics and he came up with this concept and although it turned out more war themed than we wanted we still liked it and went with it.

Very important as it depicts the band’s music and also attracts a potential listener for the album. It is as important as the songs, recording and mastering.

Maybe with today’s digital world it might not be as important for some, however we are old school and still buy physical copies and just like us there are a lot of people in the underground scene who keep on buying, thus the artwork is very important and meaningful.

With music becoming increasingly digital in nature, what’s your take on the digital/physical debate and the current state of the music industry?

As mentioned in the previous question, I am not so fond of digital releases cos it’s not the way I grew up listening to music. Yes it makes our lives easier and all that crap however it loses sentimental value of an album and its concept.

It is what it is I guess and we have to go with it, thankfully vinyl is revived making physical copies’ extinction not certain yet.

Concerning the music industry it’s gone from bad to worst unfortunately. Payment by the band is required for everything which makes independent bands like us hard to even tour outside our own country.

How do you think Vomitile fit in with the global metal scene in 2018?

Honestly I feel that Vomitile fits perfectly as a band giving that pure death metal sound that unfortunately is missing nowadays. We provide that with passion and strength and completely stand behind our music 100%

Most definitely essential as that’s where a band shows its musical power. Studio you can do all sorts of things like cheating, but live that’s not so much possible yet.

What do you get up to outside of Vomitile?

My daytime job is co-managing a craft beer bar and on my personal time I deal with home distilling of all sorts of spirits. Free time is luxury nowadays but whenever its there I try to use it as much as possible.

What are the next steps for the band?

Hopefully a European tour in the near future and promoting the album as much as possible. Maybe also a vinyl edition of our current and previous releases. We are also planning beginning of 2019 to start writing new material for our fourth full length album.

Thank you very much for having me in this interview, wishing you and your zine all the best, and as always …….DEATH FUCKING METAL.