Strangle Wire’s debut EP The Dark Triad is a raging slab of brutality and serial killer intensity. It’s packaged and delivered in a surprisingly catchy and memorable way for something as uncompromisingly dark and aggressive as this, which makes for a very satisfying listen.

Pete Clarke provides the gruesome deathgrunts for the band, and has given us some further insight into the minds of Strangle Wire…

Introduce us to Strangle Wire

We are a death band hailing from Northern Ireland. We launched in February 2017 and write old-school death metal.

We come from varied backgrounds, so our influences are quite mixed. I think the influences that come through in our music would be Dying Fetus, Cannibal Corpse and Deicide to name a few.

The Crawling – Anatomy of Loss

Haemorrhage – We Are the Gore

Tell us about The Dark Triad and its concept

The dark triad is a used to describe a psychological concept that consists of the traits of psychopathy, Machiavellianism and narcissism. Those with dark triad traits are said to be very callous and possess malevolent qualities.

To date, we have followed the same process. Our guitarist would write a track and email it to us to listen to. The rest of us would familiarise ourselves with it, and then bring it to the practice hall to rehearse it, and make changes where appropriate. Once the music is nailed down, we would then do rough demos to assist in writing the vocal patterns and lyrics. 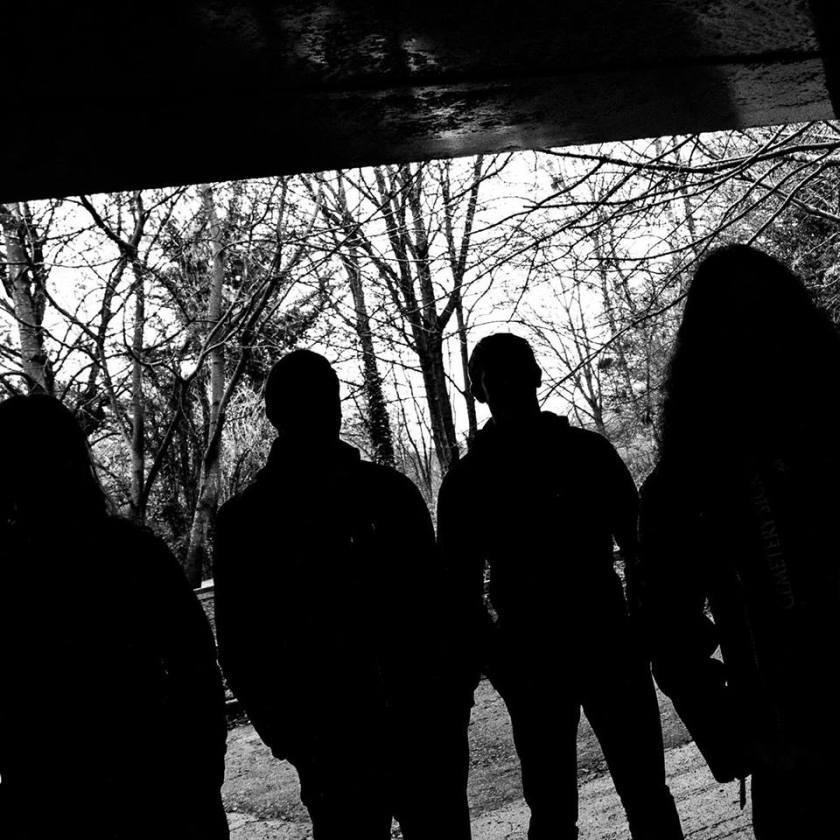 That’s something I’m not sure we could agree on. The Failure Exhibit is a popular one as it’s loads of fun to play live and tends to get the crowd going.

Undoubtedly it will mature in some respects. We have only been writing together a little over 18 months, so our sound is still developing. We will always keep the emphasis on actual riffs, whilst still keeping up the speed and the heaviness. The tracks we are currently working on for our first album have both blisteringly fast heavy parts as well as some slightly melodic passages, so there is quite a bit of variety in there.

Well, I had the name “The Dark Triad” in my head for quite some time, so the artwork was always going to have to reflect the title. The artwork as it stands is a crude attempt on our part to illustrate the dark triad personality disorder. We had ‘Exposing Shadows Photography” take the photo and then Tom Bradfield of Grind Ethic records to put it together and manipulate it into an album cover.

I think its vital, but ultimately, it all comes down to personal taste as to what makes album artwork “good”. I would much rather take a chance on an original idea than use a generic image or idea that has been done to death.

The Irish metal scene is very vibrant. There is a great mix of bands from all genres including death metal, hardcore, black metal, doom, rock, you name it.

How do you feel Strangle Wire fit into the global metal scene in 2018?

I’m not really sure. There seems to be a lot of emphasis on speed and brutality at present, and sometimes, at the expense of riffs and songwriting. I suppose we try to strike a balance, and with that being said, fill the gap between the brutal underground death metal bands and the more mainstream death metal acts.

What challenges, (if any), do you feel you have as a band due to being based in Northern Ireland?

Firstly, we live on an island. Anytime any band from Ireland decide to do anything they are automatically hit with a £500 ferry or £500 worth of flights. Also, the country is very small, and this becomes more evident when you look at the size of the cities. Bands tend to fight for crowds, and on occasions promoters have to fight for venues. As a result, crowds tend to be split and therefore quite small on occasions.

I suppose it depends on what you want to do. For us, its essential. We all love playing live and that’s where a lot of the enjoyment of being in a band comes from. Secondly, we sell more ads and merch at gigs than we do online.

What are the next steps for Strangle Wire?

We have a US tour in May coming up to promote The Dark Triad, a few UK dates coming up with Basement Torture Killings and we hope to go into the studio in December to start recording our first album.

Thanks for the interview, we appreciate every bit of support we receive.