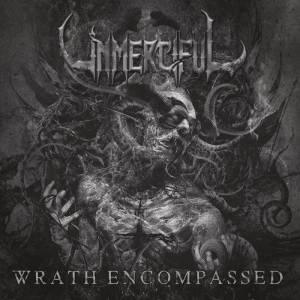 Unmerciful are a US death metal band and this is their third album.

After 2016’s Ravenous Impulse, the band are now back with a new vocalist and drummer, with 38 minutes of brutal death metal for us to get beaten around by.

It’s always easy to enjoy this sort of no-nonsense brutality, especially when it’s done as competently and professionally as this is. The music is hyper-aggressive and uncompromising, full of punishing blast beats and furious guitars. Occasional bouts of crushing groove appear out of the maelstrom to flatten the listener between the near-ubiquitous blasting. There’s even a few solos and, rarely, some hints of melody, (although these latter parts are very few and far between). Each song offers variations around this core formula, and Unmerciful have clearly gotten very proficient at what they do.

With ex-Origin members in the fold it’s unsurprising to hear aspects of this ultra-brutal band in Unmerciful’s sound, and this influence seems to be a bit more prevalent than it was on Ravenous Impulse. Throw in some Hate Eternal, as well as Cannibal Corpse, and Suffocation, and you have a good idea of the blast-heavy arenas that Unmerciful tear through.

Wrath Encompassed is a solid, enjoyable, meaty feast of brutal death metal. Unmerciful do what they do well. This is for lovers of fast-paced extremity and sheer destructive brutality; unfettered death metal barbarity.