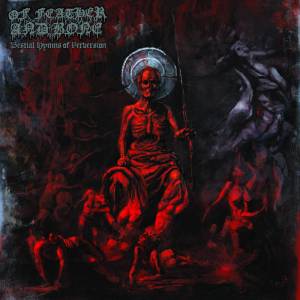 Of Feather and Bone are a US death metal band and this is their second album.

Of Feather and Bone mix brutal, raw blast beats, with slower filthily depraved sections, (think a mix of Incantation, Autopsy, and Bolt Thrower), while also exhibiting some old-school grindcore/hardcore influences here and there.

Due to the sheer darkness that these songs pour into the world the music can’t help but adopt a slightly blackened approach on occasion. Make no mistake; this isn’t blackened death metal as such, it’s just so bleak and ugly that it just happens to share some of the aesthetics with the blackened style.

As well as the bucketfuls of brutality that this album has, it doesn’t lack in a certain malevolent atmosphere either. It’s obvious that the songs have been considered deeply when written, and it’s great to hear a band that can be so utterly relentlessly unforgiving, while still also allowing for a certain type of oppressively affecting atmosphere to grow, stunted and warped, out of the Hellish noises that they make.

The singer sounds utterly inhuman. His growls are so pitch-black and guttural that they’re a thing of malignant beauty. His screams aren’t too far off this either, but it’s his growls that really hit me hard.

Bestial Hymns of Perversion a is darkly brutal and enjoyably scathing listen.