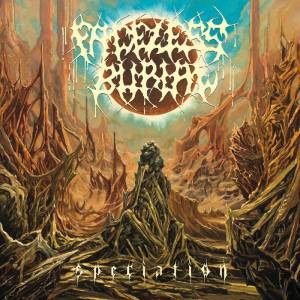 This is the second album from Australian death metal band Faceless Burial.

Speciation contains 38 minutes of classic, old-school death metal. The formula for this sort of music may be tried and tested, but that doesn’t lessen its impact any when it’s done as effectively as it is here.

There’s a Death-influenced progressive edge to Faceless Burial’s music, and they use this well; the band know their way around their instruments too, that much is apparent. Rumbling riffs and piercing, evocative leads carve through the airwaves. The band move through various paces and moods in the songs, from high-intensity blast beats, to twisted mid-paced rhythms, and crushing apocalyptic doom. Dark atmosphere permeates everything, while savagery is unleashed at select moments to drive home the band’s point.

Faceless Burial really do have the old-school sound down to an art. More importantly, they also have the songwriting skills to do the style and their influences justice, while retaining enough of a character and individuality of their own to remain relevant. Bands like Morbid Angel, Immolation, Incantation, and Death are clearly influences, and fans of these masters should find much to enjoy on Speciation.

Faceless Burial have written a very enjoyable and satisfying death metal album here. Their influences are obvious and blatant, but it’s what they do with these influences that matters, and Speciation is its own monstrous master.

Very highly recommended for fans of the old-school.