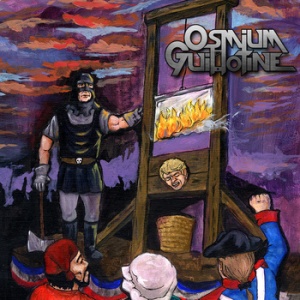 Osmium Guillotine are from the UK and this is their début album. They play Heavy Metal.

This is 80’s style Heavy Metal with a sexy guitar sound and plenty of attitude. The production is largely apt for this kind of band, although in a feat of differentiation Osmium Guillotine have a guitar tone that’s both thicker and heavier than most bands playing this genre and it works very well for them.

The music is played with passion and obvious zeal and everyone seems to know their job well. Nice solos too.

This is Old-School Heavy Metal that manages to encapsulate quite a few different feelings from early Metal and distil them into this release. Classic Metal is a given, but Doom Metal, Proto-Thrash and NWOBHM all get a look in. There’s even a touch of Punk to things now and again.

The vocals are great, and there’s not a hint of Power Metal to be seen. I love Power Metal as much as anyone, but it’s nice to hear a band like Osmium Guillotine who are just pure Heavy Metal without the more extravagant ostentation inherent in Power Metal. The singer here has a great set of lungs and possesses the charisma to do the tunes justice.

These are a strong set of songs with plenty of hooks and choruses to keep you coming back for more. Memorable melodies and good riffs flow freely and everything feels just as it should.

Iron Maiden, Black Sabbath, Judas Priest, Anthrax…if these bands float your boat then Osmium Guillotine are a logical band to check out. Along with the recent stellar release from Johnny Touch this proves once again what any real music fan already knew – True Metal isn’t dead.

Johnny Touch have recently unleashed their stunning début album to the world. Inner City Wolves is the kind of throwback to a bygone era in Metal that has no business being as good as it is. It has the timeless appeal of pure, original Metal, however; that and the fact that it’s just a great collection of songs mean that this is an album that everyone should be getting their grubby mitts on. Determined to find out a bit more about this seeming anachronism, I grilled Denimal about the wonder that is Johnny Touch…

For those of you unfamiliar with your band – introduce yourself!

There’s 4 heavy metal maniacs in JT; Ramrod Hodgson on vocals, Jamie Whyte on guitars, Inphiltrator on bass guitar and Denimal (me) on drums/cowbells.

Give us a bit of history to Johnny Touch…

I started JT sometime during 2009, effectively a mere project at that point. I had collated enough material of the heavy rock/metal ilk since the late 90’s, to warrant some form of project at the very least. Along with a couple of session members, I recorded a demo called ‘Fight For It’, which was released on pro-cassette by Abysmal Sounds Productions.

It was soon thereafter that the primary band members wove their wicked ways towards JT! From that point on we became a focussed and deadly laser beam, having wrought 2 more split 7 inch records released and more recently the début album.

Where did the name of the band come from?

I think I construed this name on a whim, it kind of stuck! It is inspired by 80’s street gangs, the leader of such bearing the name, Johnny Touch. 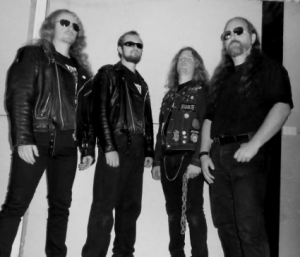 That’s what I’ve been listening to this week, and heck, I’d recommend them all!

So, a bunch of Australians manage to faithfully recreate the glory days of the NWOBHM in style and with quality. How did that happen?

Hahahaaaa jesus man! They were the ‘glory days’ for a reason. We aspire and work hard! Simple. Whether that be in relation to our skill level, performances or song writing.

In my review I also state that if this album had actually been released back in said NWOBHM glory days, you’d probably be very big indeed and famous to most Metal fans. Discuss.

Maybe, it’s hard to know, but I appreciate the sentiment nonetheless mate. It seems to me, the biggest ‘metal’ bands worldwide are still the traditional heavy metal bands. The music appeals to a broader range of music lovers due to it’s quality, catchiness, conviction, and less extreme nature. Though I remember hearing Twisted Sister’s track ‘I Wanna Rock’ when I was a kid, and seriously believed that to be the heaviest song in existence! There’s a more extreme perspective nowadays, but that song is still really fucking powerful, no doubt. If you doubt, watch them play it live!

Unfortunately many of the great metal bands are disbanded so there may be necessary voids to fill in the near future!

What did you want to achieve with Inner City Wolves?

We wrote and recorded what we would want to hear from a new heavy metal band. There’s no good reason why traditional heavy metal should be dead. So we took our own high expectations and forged something that vintage metal and rock fans would froth at the mouth for. Interestingly we also have a large cross section of extreme metal fans into JT. Especially when we play live, is the power of classic heavy metal most apparent.

And that album cover! Tell us about that…

A fantastic artist called Andrei Bouzikow painted that up for us. It’s a vista of earth in post nuclear/war ruin. Fallout having altered the local flora and fauna, huge wolves are abound. The scantily clad warrior-ess has claimed this one from a pup, riding down men for mating and food.

Are you happy with how the album turned out?

Pleased enough. It’s a snapshot of that time I doubt we could really improve on without destroying the feel of it. Everyone whom we have spun it too has thought it was an album from the late 80’s…mission accomplished.

Jamie and I write about 50/50. So either he or I will demo the tune, give it to every member to get acquainted with, then we work on that sucker until everyone has made it their bitch! I think songs should age a little bit too. Nothing like Father Time to weigh in on the formation and depth of a song.

In all ways one could respectfully imagine. We’ll produce speed metal songs, some 60’s/70’s sounding rock ballads, some overtly technical tunes. It really comes down to what the album needs to keep it interesting from start to finish.

What’s next for Johnny Touch?

JT had a quiet year in 2013 due to Inphiltrator being in hospital, so there were no live shows we could play. With the album fresh out we are now playing select live shows nationally and booked some shows outside of Australia. Hopefully ‘Inner City Wolves’ will earn us some invites to any of the myriad traditional metal festivals the world over. New material is currently being put together, we have a title and album cover concepts for this album, but who knows when we’ll be ready to record. Why rush? 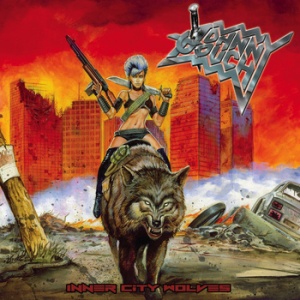 This is the début album from Australian Heavy Metal band Johnny Touch.

Just look at the album cover. I mean really – just sit and look at it. It doesn’t get much better than that.

Well, the music had better be something pretty damn good to match up to that cover I tell you.

So what do we have here then? Heavy Metal that sounds straight from the 1980’s? Yes. This has a good streak of NWOBHM about it and when you think about it it’s kind of odd that a bunch of Australians in 2014 can so faithfully recreate this kind of music from this era.

But recreate it they do, and faithfully, and well.

The band all play their parts perfectly and the solos/leads are particularly enjoyable. The vocalist has a very good voice that probably would have seen him become a superstar decades ago. In fact if this album was actually released in the era it hero-worships then it’s likely Johnny Touch would be a famous name to all Metal fans the world over. Unfortunately however it’s now 2014 and the market for this style of Metal is much, much smaller. Which is a crying shame as this album kicks serious behind.

By today’s standards this is relatively relaxed and not very extreme, but that’s missing the point. This is Heavy Metal to the blisteringly molten core and I doubt there’s a Metal collection anywhere that wouldn’t be improved by including this in it.

This isn’t a perfect album by any means, but it’s a bloody good one. It has an honesty and passion about it that’s just plain infectious, and that’s before you consider the catchy riffs, memorable choruses and top tunes contained within.

If you’re allergic to anything older than a couple of decades then this is not for you. However, if you appreciate the style of Metal that helped start it all off then you should definitely check out Johnny Touch.

Ha! This album makes me happy.