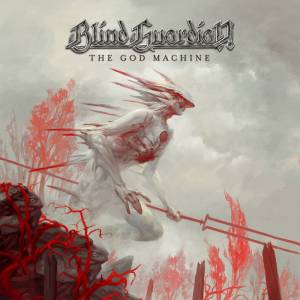 Blind Guardian are a German power metal band and this is their twelfth album.

Blind Guardian return with a new 51-minute opus. Fans of the band will be interested to know that The God Machine doesn’t directly continue with the trajectory of their last few albums, and instead offers a compelling mix of past and present.

The God Machine is a stripped back record for Blind Guardian. The band have revisited certain themes, ideas, and sounds that were more present in their earlier work, rather than in their more extravagant later output. They have done this though while still incorporating elements that they have benefited from more recently.

Overall The God Machine is faster and more aggressive than we’ve seen from Blind Guardian for many years, and less orchestral too. The material is more direct and instant-impact, while still offering plenty of depth and replayability due to the band’s accomplished songwriting. Blind Guardian have used some of their early speed metal influences on this record, merging their power metal grandeur with them seamlessly.

The songs contain all of the strong melodies, catchy choruses, and epic scope that you would want from the band, just in a more straightforward manner. Crunchy riffs and blistering solos lurk around every corner, and the singer’s iconic voice is just as distinctive and powerful as always. Of course, I don’t think Blind Guardian could exist anymore without any choirs and orchestral layers at all, so these are still taken advantage of, just more selectively. These enhancements are deployed well, bringing the older Blind Guardian style into the band’s present. This also allows for a nicely diverse album, with the faster/heavier tracks and sections being well-balanced against the rest. The album offers something for all Blind Guardian fans, of all eras.

The God Machine sees Blind Guardian emphasise the core of their sound, while still applying cinematic highlights. A potent collision of old and new, The God Machine is an extremely enjoyable and moreish record. Fans of power metal rejoice!