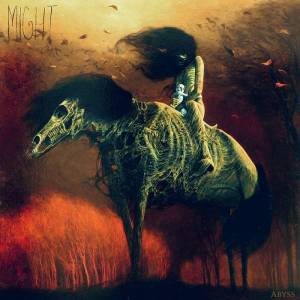 This is the second album from German doom band Might.

Might play an atypical form of doom metal with elements of post-rock, sludge, punk, grunge, and noise rock. Abyss is an unusually varied album, and operates in a lot of genres and styles, sometimes all at once.

I get strong 90s alternative scene vibes off this release, and it reminds me of a huge number of acts from that era. Not only that though, but it’s also spliced with other elements ranging right up to the present day. Imagine a mix of Neurosis, Årabrot, Hole, Jarboe, Babes in Toyland, Chelsea Wolfe, Emma Ruth Rundle, and Helmet, and you’ll still only have a rough idea of what Might get up to on Abyss.

The songs are expressive and textured. Piano enriches the songs, and different types of vocals are arranged over music that offers a diversity of delivery that’s uncommon. Punk intensity and noise rock swagger are paired with mood-based post-rock and huge sludge riffs to produce songs that bite and caress at the same time. Male and female vocals are used; the former especially have a 90s punk/alternative rock feel, while the latter are as varied as the music, from beautifully emotive cleans to raw harsh screams. Whatever the singer delivers, she has a potent presence.

Despite the doom appellation Might play at a variety of paces and textures. Abyss is a creatively diverse album, and each song offers something a bit individual. The songs are largely short, but packed with content. The diversity on display is well-realised, flowing well from one idea to the next, or incorporating different styles together. The characterful tracks each display a multifaceted personality, rich in substance and heavy with emotive weight and power.

Might are resolutely not for everyone. However, if you have a taste for non-standard music with a meaty heavy side, and have a fondness for the 90s alternative scene, then Abyss could very well be an underground gem for you to find.