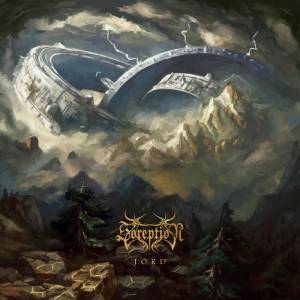 Soreption are a Swedish death metal band and this is their fourth album.

I thoroughly enjoyed 2014’s Engineering the Void, so Jord was high on my list of albums to check out. Clocking in at a lean 31 minutes Jord doesn’t mess around. Rarely have the gods of technical groove found such a fitting outlet as Soreption.

The band’s technical death metal is played with surgical precision. The songs are brutal and jagged, but unlike much tech death Soreption don’t forget the value of decent groove or the essential elements of classic song structure. Replete with barbed hooks and syncopated catchiness, you’ll remember how Soreption made you move as they tore you to pieces.

Jord is sleek and lethal. It arrives with buckets of riffs, fragments of melody, and monstrous growls to dazzle and amaze with its technical artistry. And it does dazzle and amaze, but it is the band’s ability to channel this into actual groove-focused songs that keeps you returning for more punishment.

Each song is a treasure trove of harsh complexity, and each easily holds the listener’s attention through strong songwriting and potent delivery. Guitar solos are bountiful, (including guests spots from bands such as Abiotic, Archspire, Inferi, and Psycroptic), and there are few synth flourishes which work very well.

Jord is a powerhouse of modern death metal proficiency and rhythmic technicality. This is a must-listen for fans of bands like Archspire, The Zenith Passage, and Decapitated.