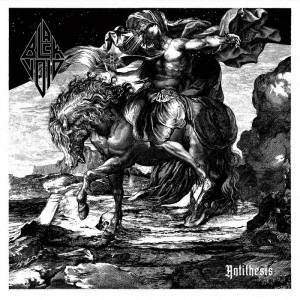 This is the debut album from Black Void, a Norwegian black metal band.

Antithesis is a feral beast, but not without its refinement or sophistication. The band’s punky blackened assault is visceral and energetic at heart, but augmented by elements of emotion and depth that probably should come as no surprise given the band membership.

On the one hand Antithesis offers filth-ridden violence and raw aggression, and it is a wild ride that draws you in with its energetic passion and scathing disregard for safety features. One the other it offers a compelling vision of layered and emotive darkness that plays out with well-crafted song-focused accessibility. Some of the choruses are very catchy, and the melodies moreish and infectious.

On top of this I also hear a distinct Paradise Lost influence on occasion, especially in some of the melodies. Antithesis is actually quite a diverse listen overall though, so you can hear a range of bands in places, everything from Satyricon and Darkthrone to Audrey Horne and Soilwork.

As you may have guessed at this point, Black Void do not simply play fast and nasty, although they certainly can do that. The songs are well-written and demonstrate a band with a comfortable and professional sense of songwriting skill. The rock influences add a structure for the band’s nihilistic aggression, and there are some unexpected moments of lightness and melody built into the songs, including potent clean singing. These latter moments add a level of emotive and atmospheric content that raises the band above their punk and black metal roots, allowing them to somehow exist both in underworld darkness and on the surface, basking in the bright melancholic light of a dying world.

Antithesis demonstrates a duality of existence, ranging from raw punk-edged black metal that’s harsh and brutal, to thoughtful sophistication and atmospheric depth born of dark rock’s emotive heart. Of course, I’m making it sound overly simplistic, as in reality the two aspects of Black Void inform and feed each other, so they can’t always be easily separated.

Antithesis is an accomplished and very enjoyable record. Able to bring everything from feral heaviness to stadium-sized choruses to the party, Antithesis offers a diverse and wide-ranging selection of influences and ideas for the listener’s delectation. If you like your music to have a well-judged mix of punk, black metal, and rock, then look no further than what Black Void have created.