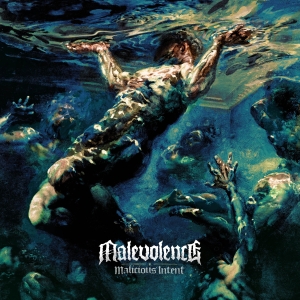 Malevolence are a metal band from the UK and this is their third album.

Malevolence play the sort of groove metal/metalcore hybrid that sounds like it should have been released in the mid-90s. If you take bands like Pantera and Hatebreed, and then throw in a touch of Crowbar, you’ll have a decent reference point for what Malevolence get up to on Malicious Intent; 38 minutes of riff-worshipping heaviness and vulgar displays of power. I grew up listening to these bands and this sort of music, which is why I like Malevolence very much. Honestly, it’s like being transported back to my youth in some ways.

These songs smash together anthemic hardcore heaviness, fist-pumping metallic heaviness, and sludge-thick crushing heaviness into energetic tracks of pure, visceral heaviness. Have I mentioned the heaviness yet? There’s lots of it to go around on Malicious Intent. The band’s heavy songs are absolutely designed for the live environment, and I can almost smell the mosh pit and taste the circle pit as I listen to Malicious Intent. This is music to get rowdy to.

Amidst the heaviness though the band do show they have other tools in their toolbox. After all, Pantera didn’t only do heavy did they? Softer, reflective moments appear, (most notably on Higher Place), and emotive elements are built into some of the guitars across many of the songs, not to mention some of the vocals.

The lead singer’s rough barks serve the music well. The guitarist occasionally joins in the fray to deliver rich Crowbar-esque cleans that inject an additional emotive element into the proceedings. Both vocal styles fit the music perfectly, allowing the songs to come to life even further. Guest singers from Kublai Khan and Trivium appear on two tracks too.

This a collection of very enjoyable, very likable metal songs that should find favour with anyone into old-school tried-and-tested heaviness.