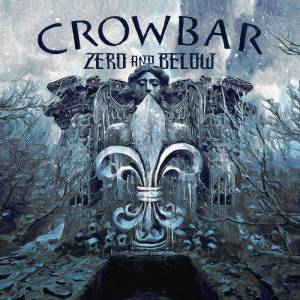 This is the twelfth album from US sludge metal legends Crowbar.

In an ideal world Crowbar whould need little introduction. The band have been toiling away producing some of the absolute best song-based sludge metal since the early nineties, and have managed to not only amass a huge discography of great songs and albums, but have done so while basically carving their own path through the metal landscape.

Yes, nobody else really sounds like Crowbar. This is partially down the music itself, with its emphasis on crushing-yet-catchy riffs, and partially down to the inimitable vocals of the frontman Kirk Windstein, who is on top form here.

The songs on Zero and Below are unmistakably Crowbar through and through. They’re massively heavy, but are filled with catchy vocals and moreish riffs. Crowbar have forgotten more about crafting sludgy hooks than most bands will ever know. Occasional dark melodies enhance the songs further, and the singer’s unique vocals once again take us through a world of pain and anguish.

For those that know the band, the style of Zero and Below is more reminiscent of the band’s earlier work, circa mid/late 90s. In other words, it’s colossal and doomy, while still being highly memorable and accessible. Crowbar know how to pen a damn good tune, and on Zero and Below there’s ten of them.

Anthemic, emotive, distinctive, and just packed with good songs, Zero and Below is great addition to Crowbar’s enviable discography.

One thought on “Crowbar – Zero and Below (Review)”