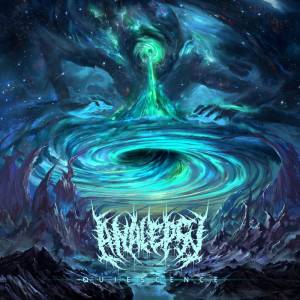 Analepsy are a slamming brutal death metal band from Portugal and this is their second album.

I have been waiting for this for soooo long. It’s been a long time since I was hugely impressed by 2015’s Dehumanization by Supremacy and 2017’s Atrocities from Beyond, but Analepsy have finally returned to show everyone who’s boss. Back with almost a completely new lineup, (which includes members of Annihilation and Necrovile), Quiescence contains 39 minutes of Analepsy doing what Analepsy do best – crushing skulls with massive slamming death metal.

Analepsy know how to peel off thunderously heavy riffs and huge brutal slams. These basically form the core of the songs, but while they’re as effective and crushing as ever, the Analepsy of 2022 is an evolved predator. Not ones to merely rely on thick slamming guitars, Analepsy’s songs are enriched with a number of elements which help them to stand out from the slam and brutal death metal crowds.

One of these is their potent melodic sensibility; Analepsy know how, and when, to insert melody, and how to make best use of it in relation to the devastating brutality they unleash. There’s an increase in complexity and technicality on Quiescence too, but the band are skilled enough to never let this get in the way of the core brutality of the songs.

Alongside this sit a selection of killer guitar solos and songwriting that has taken lessons from old-school death metal with regards to dynamics, structuring, and hooks. Analepsy demonstrate over and over again that they are well-versed in combining the old-school and the new to produce shockingly good death metal.

This means that Analepsy’s songs offer a very well-rounded death metal experience. Quiescence is undeniably slamming and brutal, but it is also more than that, and delivers greater value than your typical band that lurks in these subgenres. The final package comes wrapped in a professional modern production and surgical execution; Quiescence is both very impressive and very enjoyable.

The return of Analepsy has not disappointed. I defy you to stay still while listening to these songs. Importantly though, the band offer more depth than simple slamming grooves; Quiescence has longevity built in, and the right level of quality that demands repeat visits.

If you’re a fan of death metal then this is an essential listen.