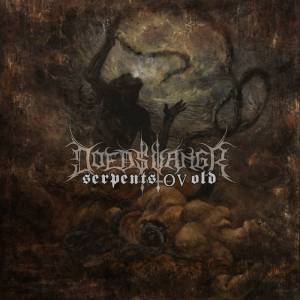 Doedsvangr are a black metal band from Norway/Finland and this is their second album.

2017’s Satan ov Suns was an enjoyable record, so I’m glad we now have a new album of occult second wave black metal fury to explore. Made by musicians with a huge range of experience, (having spent time in bands such as Nordjevel, Behexen, Aosoth, Tsjuder, Sargeist, Horna, Nightbringer, Antaeus,  and Temple of Baal, to name just a handful), Serpents ov Old is the sound of a group that really know what they’re doing with the style.

Doedsvangr spend 45 minutes dishing out blackened punishment on Serpents ov Old. Inspired by the classic Scandinavian second wave, and imbued with the passion of true believers, this is an album of furious evil and grim expressive darkness.

It’s not an album without nuance though. Atmospheric and melodic components are both readily used by the band. Doedsvangr are very capable at crafting deep blackened atmosphere and of weaving sinister melody into their songs, to great effect.

The music’s malevolent groove really gets the fog swirling around you. Blasting mayhem hits you hard, before flaying your skin. The melodies are piercing and infectious, slicing deep into your heart. This album is well-written and well-delivered by veterans of the scene; it does exactly what you would want it to, and it does it better than you might expect it to as well.

This is an old style, but if it is one you’re partial too, then Servants ov Old is hard to pass up. This sort of thing is effortlessly enjoyable and moreish, especially when it’s created with such skill as it is here.

Highly recommended for all adherents of the dark ways.