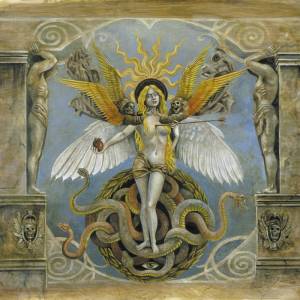 Aosoth are a black metal band from France and this is their latest album.

This is dark, suffocating, dissonant black metal. Elements of death metal can be heard too, but these are buried by waves of blackness so deep that you could get lost in them.

Chaotic, infernal, and murky, this is an album of furious cold endeavour, full of music that wants to drag you down and cover you in suffering.

For such bleakly nasty music, there’s also a high degree of variety spread out across the tracks. Different speeds and, (evil), feelings are manifested at different times, and each track has its own identity in the whole. This is black metal that’s well-written and delivered by experts that know their art inside and out.

With so many quality riffs and dark blackened melodies that seem to lurk amidst the dissonant distortion, this is an easy album to enjoy for those initiated into this kind of sonic extremity. I’m sure for anyone else this sounds impenetrable and unapproachable, but for all its grim murk and density, this is a surprisingly spacious album, drawing you in with its malevolent allure before closing in on you and pulling you under.

The drumming on this release is particularly impressive, seemingly unleashed by a multi-limbed daemonic entity that has somehow been bound to the band’s service.

This is an extremely enjoyable and satisfying listen. The music provides a firm kick when you listen to it, but also has more than enough depth and substance to keep you returning for more.

One thought on “Aosoth – V: The Inside Scriptures (Review)”