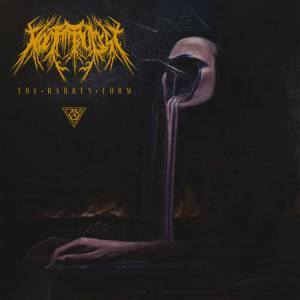 Noctambulist are a blackened death metal band from the US, and this is their second album.

Featuring the drummer of Cordyceps, Noctambulist play a blistering form of extreme metal. Formed around a core of brutal death metal, the band then expand on this with elements of black, dissonant, technical, and post-metal, making for songs that may be long and involved, but don’t lack in atmosphere or nuance. Think of a mix between Hate Eternal, Ulcerate, and Deathspell Omega, and you’ll be on the right lines.

The music on The Barren Form is textured and well-crafted. The band clearly know their instruments well, and their professional delivery and performances cannot be faulted. The technical aspects of the music are never ostentatious or included just for the sake of it; on The Barren Form the musicianship exists to service the needs of the songs and the atmosphere, not the other way around.

The music is intense and aggressive much of the time, although Noctambulist make good use of their dissonant blackened influences to add depth and shading to their assault. Amidst this they also flesh out their sound with mood-building passages, emphasising the atmospheric side of their dark nature. I hear some post-metal in the band’s sound in occasion too, in the slower, mood-oriented sections.

I really like what Noctambulist have achieved on The Barren Form. Joining up hyperaggression with blackened dissonance and grim atmosphere is not a simple thing to do, yet this record does exactly that. Across 44 minutes the band present a nightmarish, unsettling, and violent journey into darkness.