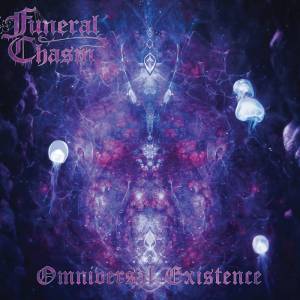 This is the debut album from Danish doom metallers Funeral Chasm.

Funeral Chasm play their music slow and with an emphasis on atmosphere. Omniversal Existence takes this starting point and delivers music that combines funeral doom with old-school Gothic doom metal. Add in some elements of first and second wave black metal, especially regarding a taste for expansive keyboards, and you have Funeral Chasm’s debut record.

The songs are melodic and mood-drenched, taking the band’s influences and channelling them into musical expressions of pained torment and woe. The album is saturated with feelings of sorrow and despair, and the songs do a good job of evoking a range of similar negative atmospheres and feelings. Each song carves an emotive path into the cosmos, driven by plaintive melodies, swathes of keyboards, and charismatic singing. It’s a textured formula that Funeral Chasm use, and they know how to craft engaging and enjoyable songs from it.

The vocals mix deep ragged growls, harsh screams, and clean singing. Of the latter, this is largely well-performed, adding an extra layer of character and emotion to music that already has a large amount of this.

Omniversal Existence is a thoroughly old-school experience that benefits from a heartfelt delivery by people that clearly know and love the style. Couple that with subject matter that’s a lot more personal than the norm for this genre, and imbued with real depth of feeling because of this, and you have an album that is an underground gem. If you’re in the mood for this sort of misery, then Funeral Chasm are better than most.