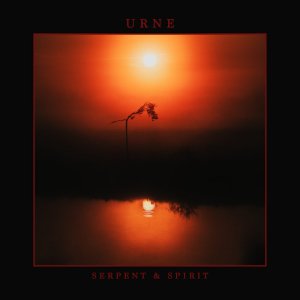 Urne are a metal band from the UK and this is their debut album.

Urne combine a variety of influences onto their sound, resulting in an album of heaviness that’s crushing, while also taking the listener in an emotive journey. You can hear elements of bands like Mastodon, Opeth, Metallica, and Alice in Chains in Urne’s sound, but mostly you can just hear Urne themselves, living their best heavy life. Combining elements of thrash, doom, hardcore, sludge, and progressive/tech metal into a molten metal beast, (it even has a blackened feel in places), Serpent & Spirit contains 56 minutes of prime metallic heaviosity.

The feel of these songs is of a band that have taken the crossover approach, expanded it with modern sludge elements, and then built upon this with progressive metal expertise. The end result is a curious, but very effective, mixture of old and new. Almost like what a Mastodon record might sound like if they were covering an obscure 80s thrash album. Or something. You get the general idea.

Urne’s progressive songs are hard rocking and thrash along with crunchy riffs. These tracks are compelling and impactful, smashing into the listener with meaty guitars, harsh shouts, and pummelling drums. A strong melodic side works wonders, helping to enhance the band’s delivery with feeling and rich colour. Atmospheric sections and emotive clean singing add further depth, resulting in a thick metallic tapestry for the listener to wrap themselves in. There are some great guitar solos, and the entire album is very well-written.

The songs are delivered with character and skill, and the album flows easily from one powerful cut to the next. A lot of effort and passion has clearly gone into Serpent & Spirit, and although it’s a clear love letter to 80s metal records, it is brought firmly into the modern day with its broader range of influences and ingredients. Even though Serpent & Spirit isn’t strictly speaking a thrash album, it’s probably the best thrash album you’ll hear all year.

Urne’s debut album is hugely impressive and extremely enjoyable. If you’re a fan of heavy music that doesn’t restrict itself to just one thing, then this is an essential listen.