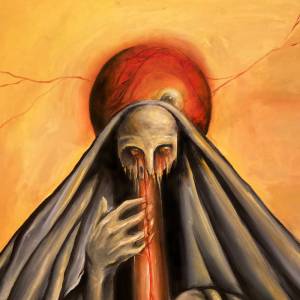 This is the debut album from Wanderer, a hardcore band from the US.

The songs are well-crafted monsters, combining crushingly heavy riffage with grim atmosphere and lethal savagery. I like the style that the band have assembled for themselves; Wanderer explore a few different aspects of the aforementioned genres, sometimes all within a single song. This is not a one-dimensional release, and is actually quite multifaceted for something as unfriendly, as nasty, and as brief as this is.

Snatches of melody appear. Distorted metal muscles are flexed. Punk attitude infects the playing. Sludge intensity destroys the opposition. Foul atmosphere suffocates. D-beat energy captivates. Dissonant guitars strangle the light. Huge riffs dominate. I could go on, but you get the idea; Liberation from a Brutalist Existence is dark, heavy, and well-differentiated. Wanderer have produced an album of extremity that’s compelling, enjoyable, and grimly infectious.

Also, the singer has a great voice, especially his deep, soul-swallowing growls.