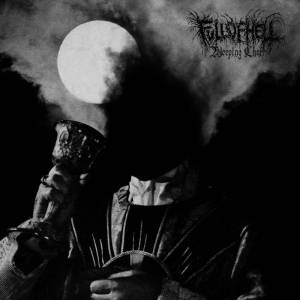 This is the fourth album from US grinders Full of Hell.

The noise-enhanced grinding extremity of Full of Hell returns, and with Weeping Choir we get a further 25 minutes of abrasive nastiness and inventive grindcore intensity.

Mixing together elements of grindcore, hardcore, death metal, powerviolence, and hardcore, (and others), with noise and power electronics, Full of Hell are extremely adept at their craft at this point in their existence. Weeping Choir is testament to their ability to write not only some of the harshest extreme music around, but also some of the most effective and well-structured songs that actually manage to be catchy in places.

Weeping Choir is, once again, a varied listen, with all of the songs having selling points of their own. Each song here exists in its own right and has its own assets, which are deployed in a multitude of ways and to much benefit. The deathgrind/deathmetal elements that were so prevalent on Trumpeting Ecstasy have been reeled back somewhat on Weeping Choir, replaced with other sorts of savagery from the band’s entire back catalogue, and allowing the band to experiment more. The album centrepiece, for example, is the 7-minute sludge/doom wonder that is Armory of Obsidian Glass.

Memorability and depth is baked into the band’s sound, despite how nasty they get, and these new tracks are some of the best the band have produced. Full of Hell have never rested on their laurels, and on Weeping Choir they continue to push themselves to be the best they can be. It’s worked.

This is unconventional and atypical music, but doesn’t really feel so in an alienating or off-putting way. For someone steeped in the ways of extreme music, Full of Hell offer a panacea to the generic and staid. Weeping Choir is exciting, adventurous, and dynamic, while also being familiar and welcoming in its own harsh, unfriendly way.