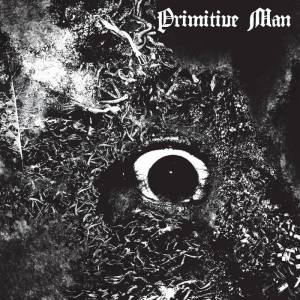 Primitive Man are a doom band from the US and this is their third album.

Primitive Man are one of the heaviest bands in the world, and one listen to Immersion just solidifies this statement as an undeniable truth. The band’s heaviness comes from more than just bone-breaking guitars though, as it also comes from the overwhelmingly bleak moods and despairing emotional depths that their music charts. Immersion is a concise and focused exploration of these realms. Where previous album Caustic was a wide-ranging release, Immersion constrains itself to shorter song lengths, (and less of them), as it totally envelops you in its desolate sound. The album is well-named, as these 36 minutes are completely immersive, to the point where you could almost lose yourself in the suffocating harsh atmosphere of Primitive Man’s world.

This is an ugly album filled with the sort of unrelentingly harsh doom and sludge that words like ‘crushing’ and ‘claustrophobic’ don’t truly do justice to. A dark menacing atmosphere permeates every second of this release, and the tense feelings of hopelessness and hatred are hard to shake off, even once it has finished.

Immersion is a Hellish nightmarescape of tormented guitars and deep daemonic growls. The slow, chilling tracks are occasionally punctuated by impenetrable noise or brutal blast beats, but mostly operate in more glacial territories, barren and empty of life. There’s an intensity of purpose here that few bands are able to match; these songs seem to directly channel negative emotions and auras straight into the listener, swamping them with unforgiving darkness and despair. This is not a nice album, and while it’s resolutely not for everyone, for those that can stomach doom as harsh and unrelenting as this, Immersion is a masterpiece of grim art.

This is the sound of existential dread and crisis given musical form. Nobody makes music quite like Primitive Man.