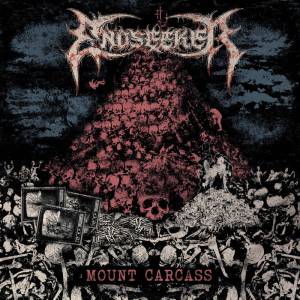 This is the third album from German death metal band Endseeker.

2019’s The Harvest was a solid and enjoyable slice of Swedish-influenced death metal, so when the 36-minute lump of sinew and teeth that is Mount Carcass appeared on the horizon, I knew I wanted to embrace it eagerly.

In some ways the band’s latest release is stripped back and less polished than The Harvest, revealing a band hungry for blood and ready to get their hands dirty. Mount Carcass doubles down on the core of the Endseeker sound – roaring Swedish death metal, augmented by the occasional other death metal influence and with some grisly crust thrown in for good measure.

The album has a lot of good riffs, and these are forged into songs that hook you and keep you. The band have also directed a portion of their considerable energy to beefing up the melodic portion of their sound, and to great effect; the album ripples with catchy heaviness and bristles with melodic bite.

I’ve mentioned many times in the past how much of a sucker I am for this style, and even though my eternal Swedeath love has cooled somewhat, it’ll never die, especially when there are bands like Endseeker continually rekindling it. Mount Carcass is, quite simply, a damn good Swedish death metal album.

If you’re a fan of bands such as Bloodbath, At the Gates, and Dismember, then this is very much for you. Tune in, turn it up, and get that head banging.