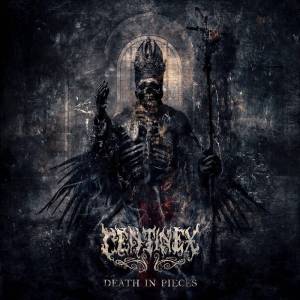 Centinex are a Swedish death metal band and this is their eleventh album.

I always enjoy a bit of Centinex. I’m a sucker for the Swedish strain of death metal at the best of times, and Centinex have pretty much mastered the style in the past.

2014’s Redeeming Filth and 2016’s Doomsday Rituals were both very enjoyable slabs o’Swedeath, but Death in Pieces is a little different in this regard. Yes, if you’re a fan of Swedish death metal I’m sure you’ll get on well with Death in Pieces, but don’t expect a repeat of the band’s last two albums.

Why? Well, the one notable difference to these previous records is that the band have a new lineup now, including a new singer. As such, Death in Pieces has a different feel to it than its predecessors. As well as the change in vocals, (which are less brutally deep), there’s more of a thrash/USDM influence felt in the music too. Riff-heavy and packed with crushing groove and barbed aggression, Death in Pieces is Swedish death metal by way of Florida. Unashamedly taking cues from the 90s, this album spends 34 minutes waging war with heavy riffs and snarled growls.

If you’re a fan of death metal with brutal groove then check out Death in Pieces. It doesn’t reinvent the wheel, but its simple, no-frills brutality is endearing and gets the job done.