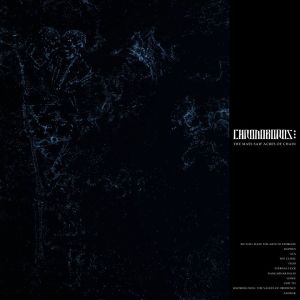 Having enjoyed both Dialing up the Cutter and No Dirt or Silver Will Have Us Sated, we now turn to the latest Chronoboros release, which finds the band in good form as they plough through 35 minutes of angular, unorthodox material.

Returning to the band’s eclectic mix of hardcore, sludge, noise rock, mathcore, and alternative metal, Chronoboros once again show off what they are capable of with style and ease. The music is intricate and complex, brimming with aggressive tendencies, while layers of depth and sludgy thickness drag the listener down into the band’s world.

Sometimes murky, sometimes sharp, the songs range from high intensity directness, to atypical explorations of extremity, to considered vistas of distorted dissonance, and much more besides. Jagged and unfriendly, but not without appeal or a certain non-standard appreciation of hooks of a sort, this is music for people who aren’t content to listen to the same old thing over and over again.

I’ve said in the past that Chronoboros’ music reminds of a mix of bands such as Association Area, Fudge Tunnel, No Anchor, Unsane, and The Dillinger Escape Plan, and this remains true.

Check this album out and lose yourself in the band’s unusual grooves.