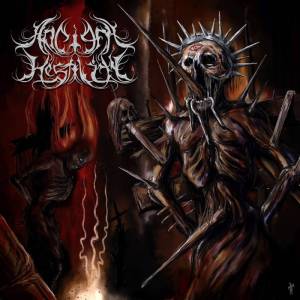 Ancient Hostility are a Ukrainian/US black metal band and this is their debut album.

This is, on the surface of things, a second wave black metal album, full of the sort of misanthropy and hatred that you’d expect for something like this. Scratch the surface, however, (and by this I mean actually listen to it), and you’ll also find a bit more than the norm here.

In addition to the groove and blast you may expect, the songs are also enhanced with a creepy atmosphere, bordering on depressive black metal and dark doom occasionally. Added to this is a certain level of dissonance and technicality that can be felt just below the murky surface in places, (this also gives birth to some killer riffs). When combined, and then injected into the second wave template, you’re left with an album that feels both familiar and alien.

These more atypical aspects increase the enjoyability and replay of this album no end. In fact, it’s the darker, doomier, atmospheric side of the band that really hits the spot for me.

The vocals are my favourite sort for black metal bands that lean to the atmospheric or more unusual side of things – sharp, needle-thin, and full of malice. The singer’s voice is perfect for this kind of work, and her delivery is vicious and expressively serrated.

With everything taken together, there’s more depth and nuance here than I was initially expecting. With its foreboding, menacing atmospheres and grim, nihilistic moods, Ancient Hostility is an album that offers something more than your bog-standard black metal fare. You’d better make sure you check this out.