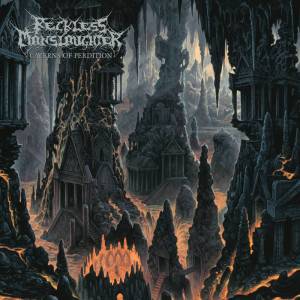 This is the third album from German death metallers Reckless Manslaughter.

It seems a long time since 2013’s Blast into Oblivion came out, which of course is has been. Although the band have released a couple of splits and a demo in the intervening years, I haven’t heard them, so Caverns of Perdition is my first chance to catch up with them again.

This new release builds on the band’s previous good work, and continues its war on the light, crusading into as many old-school death metal territories as it can. This is one of the album’s strengths, as it doesn’t limit itself to just one style of old-school carnage. Bands such as Morbid Angel, Bolt Thrower, Dismember, Six Feet Under, and Autopsy are all represented, all mixed in with Reckless Manslaughter’s own character.

From blast beats, to meaty grooves, to venomous riffs, to macabre melodies, to slow, crushing doomscapes, Caverns of Perdition takes a tour of the war-torn death metal landscape and pronounces itself satisfied with what it sees. Each of the different tracks on here offers something a little individual. There’s a core personality that Reckless Manslaughter have, but then they allow this to spread on each song to create nine different monstrous tracks, each one nicely differentiated from the last in one way or another.

It turns out that Caverns of Perdition has been well worth the wait, and I can heartily recommend this album for any fan of well-written, gratifying death metal.