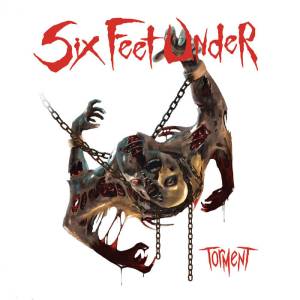 Six Feet Under are a death metal band from the US.

I enjoyed Crypt of the Devil, and Torment is the band’s latest forray into the killing pits. Having specialised in their own brand of death metal grooves for decades now, I always like to catch up with what Six Feet Under are doing.

Every Six Feet Under album has its own feel and personality, which is no easy thing to achieve for a band, especially one as prolific as this one. Consequently, some albums are stronger than others, but each one has been an enjoyable listen and has its own distinct character.

So what about Torment? On this latest release, the band sound heavy, solid and more aggressive than ever. Six Feet Under have always been about the groove more than anything else, with blast beats and speed being somewhat of a rarity. Not so on Torment. This is probably the fastest and most savage thing that they’ve ever put out, and I must say I’m liking it a lot.

The increased intensity demonstrated on Torment doesn’t come at the reduction of the band’s trademark catchiness though, which is reassuring. These songs bash your skull in easily enough to make a lasting impression, and the added aggression shown across the songs just adds serrated scars to the bruises.

With some fresh blood in the band, the songs have a greater level of both brutality and complexity in them, resulting in a deeper level of carnage than we typically experience from Six Feet Under. The brutality outweighs the complexity and nuance, of course, (as it should), but the latter two aspects are still there in some of the more intricate riffs.

The band’s legendary vocalist, and ultimate controlling force behind the band, is on fine form too. His voice is satisfying and focused, showing a directed energy that can be just as intense as the barbaric music.

Torment is definitely one of Six Feet Under’s best albums. More aggressive than ever before, but still with the trademark groovy catchiness we know and love, everything about this album is a winner.