Blackwater Holylight’s self titled debut album is a gorgeous mix of heartfelt vocals, hard rock and psychedelia, and dashes of old-school doom. A rich and textured collection of highly emotive songs, the album is warm and ethereal, easily impressing with its easy atmosphere and diverse songwriting. It’s definitely a keeper.

Introduce us to Blackwater Holylight – how did you form?

Hey there! Blackwater Holylight is Allison (Sunny) Faris (bass/vocals) Laura Hopkins (guitar and vocals) Sarah Mckenna (synths) and Cat Hoch (drums). We formed in the spring of 2016 in a basement in Portland, OR.

Where does the band name come from?

We went through a ton of ideas for about a month and finally came up with Blackwater Holylight, we all liked the way it sounded and looked so we just decided to roll with it!

Musically we’re all influenced by a ton of different musicians and bands. We all have our own individual tastes. But we are also influenced by life, learning and growing. Taking the experiences we’ve been through and challenging the struggles and growth through music.

Well this is Sunny, so I will say Weeed, Thou, The Body, Sumac and Yob. 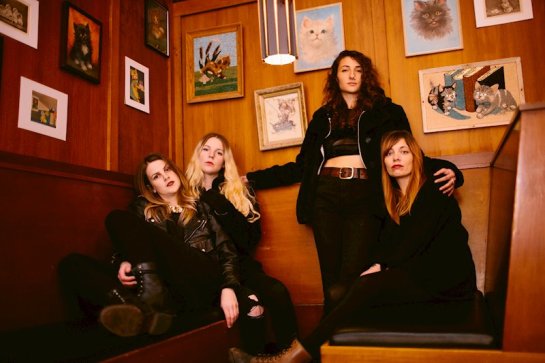 Tell us about your debut album

It was recorded in Portland in a few different home studios. We did a lot of writing in the studio so some of the tracks we had never played before as a group, they just came together organically in the recording process. We learned a lot about our process and each other during that time.

What are your intentions/goals with the album?

The intention was to be as honest as possible and to nurture our vulnerability, to allow ourselves to grow and learn without fear. That’s actually my intention for the entirety of the band and our future forever. The goal for the album was to record a album that reflects our intentions!

Most of the time it starts with me coming in with songs I write in bass with vocal parts, and then everyone builds their own parts on top of what I bring in. Sometimes we have ideas for each other, but we all write our own parts for the most part. Laura also writes songs and guitar from time to time and presents them to the band in the same way.

I think probably Sunrise or Willow because they are both unique structurally.

Our label RidingEasy Records takes care of the album covers on the labels, but usually they work with the bands on what imagery they like and then find artists to work with.

I think the album art is very important. There is the saying “you can’t judge a book by its cover” but come on we all do it.

How do you feel you fit into the global music scene in 2018?

Wow that’s a tough question! I think we fit in just fine with more and more women standing up, coming together and taking a turn in the spotlight.

With music becoming increasingly digital in nature, what’s your take on the digital/physical debate and the current state of the music industry? Also – playing live – essential or pointless?

I think both digital and physical have a specific role that are both necessary for every band. And of course playing live is essential!! Playing live is everything.

What are the next steps for Blackwater Holylight?

We’re going to be starting to track and write our next album this summer! We’re doing a small tour in the summer and hope to get on a bigger tour for the fall.