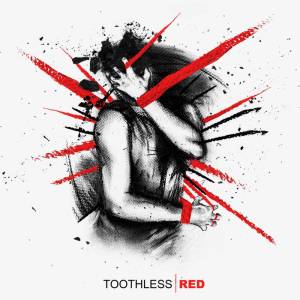 Toothless are a hardcore/metalcore band from the US and this is their latest EP.

The press blurb describes Red as being influenced by bands like Norma Jean, The Chariot, and Every Time I Die, and I can see that; this is of that same breed of chaotic, barbed metal/hard/noise/mathcore. If you like those aforementioned bands, then you should get on very well with Toothless.

The songs are full of spiky riffs and angular aggression, and it’s clear from the very first track that Toothless are more than capable purveyors of this kind of mayhem. The music shows a good combination of chaos and restraint, making for songs that know when to focus, and know when to let loose.

You can hear more influences in Toothless’ sound than simply the above ones too, and there are parts of these songs where they significantly up the metallic side of the equation and unleash some quite beefy and aggressive sounds; it’s good that this is always counteracted by a more free-form method of craziness, however, and the songs balance these competing forces well.

There are also other elements included here and there, including lighter moments and atmospheric sections. The entire EP only lasts 22 minutes, and there’s a surprising amount of variety and interest to be had on it. Blood hell, this really is good.

I hear echoes of Blood Has Been Shed, Converge, Comeback Kid, The Dillinger Escape Plan, 7 Angels 7 Plagues, Beecher, and Torn Apart on this EP, as well as Every Time I Die and the rest. It’s almost like a greatest hits amalgamation for this kind of music. Greatest hits is right though, as these songs are first-rate. The band’s own collective personalities shouldn’t be discounted either, of course, and this is a passionate and highly promising release for Toothless.