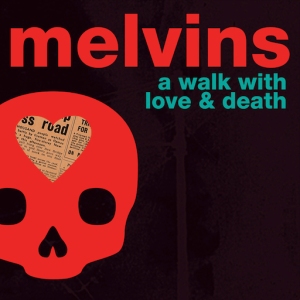 Melvins are a US sludge/metal/rock/doom band and this is their latest album.

A Walk with Love and Death is an album of two halves. The Death side is a ‘normal’ Melvins album, (whatever that means in the context of their ever-changing style), while the Love side is a film score to a short film that shares the same name as this album.

Melvins are one of those bands that I don’t really know too well considering their imposing discography size, but what albums/EPs of theirs that I do have I really, really like. Due to the fact that the band are as legendary and highly-regarded as they are, it should be no surprise that I enjoy what I have heard as much as I do. The mystery, I suppose, is why I haven’t sought out more of their material.

Anyway, this latest album is just as good as anything else of theirs that I’ve heard, although this does come with an important caveat with regards to the second half of the release.

As diverse and full of interesting and unusual ideas as you would hope for from a band like this, the Death side is a ridiculously strong collection of tracks. Each song has its own identity and firmly revels in its own individuality and character. This side of the album explores various different moods and feelings across the 38 minute playing time, with the band easily demonstrating why they have such a reputation for quality that they have. Melvins are adept at writing catchy and memorable songs that are both atypical and infectious in nature.

These songs are effortlessly emotive and full of meaty content. There are some truly captivating riffs and melodies on this release, too. Mixing rock, sludge, doom, and metal, the tracks on Death are all first-rate examples of a band that have their own style and character, and you can see why they have been, ( and continue to be), such an influence to such a wide variety of different bands and genres.

In contrast to this, the Love side of the release is definitely a soundtrack piece of music, with all of the potential pitfalls that this entails. Without the accompanying visuals, the music stops and starts in typical soundtrack fashion, cutting off promising lines of exploration short before they can develop into anything, and letting others go on for too long.

Experimental and avant-garde; it is good, make no mistake, but not in a conventionally enjoyable way. A lot of soundtracks suffer due to the nature of scored music taken out of context, so Love is best enjoyed with this in mind; sit back, switch off, and enjoy the vaguely psychotic and schizophrenic feelings that emerge from your speakers as you immerse yourself in this side of the album.

Eclectic and miraculous, A Walk with Love and Death is still an essential listen, if mainly for the Death side. Love is definitely worth experiencing, but has much less replay factor due to the nature of what it is.

Either way, you must give this a listen.

9 thoughts on “Melvins – A Walk with Love and Death (Review)”