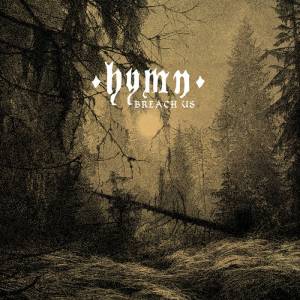 This is the second album from Hymn, a Norwegian doom/sludge metal band.

Hymn play a mix of doom and sludge, and Breach Us contains 38 minutes of music divided into 4 tracks. The band is made up of only two members, but you wouldn’t necessarily realise this immediately as Breach Us sounds massive.

The songs consist of thick sludgy riffs, the sort that feel visceral and grimy, like a dense oil or tar has been poured over everything. It’s heavy; the sort of heavy that seems like it could shatter reality if it’s not careful. There’s a serpentine quality to the guitars too, in places, as they seem to slither and writhe like they’re alive.

The above is then channelled into impactful songs that combine the band’s obvious love of heaviness with a clear talent for an emotive, atmospheric version of said heaviness. This is music that has a clear goal of achieving an emotional response while it’s crushing you, and it realises this quite easily. Each song has its own flavour though, and when the band decide to be less than bone-breakingly heavy, they can do this ably as well.

The interplay between the guitar and drums is well-considered, and the duo behind Hymn clearly know each other well. This relationship allows them to craft tracks that sound both exploratory and near-improvised, while simultaneously having a structural cohesion that keeps everything working together perfectly.

The crown on all of this is the vocals, which primarily deal in emotive roars that sit somewhere between Conan and Knut, with a touch of Isis. I like them a lot, and they fit the music like a well-worn glove. Clean singing is hinted at in Exit Through Fire, but it’s the following track Crimson where these are fully realised. They are similar in style to those that you’d find in a band like Yob or Melvins, and are very well-performed. Then, unexpectedly, the vocals at the start of Can I Carry You sound like something off a Today Is the Day album. Nice.

Beach Us is a powerhouse of an album that grabs your attention by crushing you flat, but keeps it with emotional depth and skilled songwriting. As you can probably guess, I’m very enamoured with this album, and insist that you check it out.