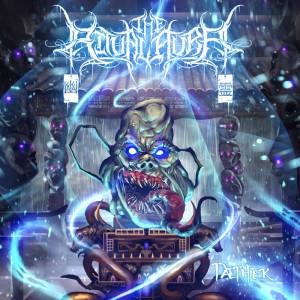 This is The Ritual Aura’s second album. They are an Australian technical death metal band.

Well, hold on to your hat, because you won’t be expecting this.

The Ritual Aura’s 2015 debut album Laniakea was a favourite of mine. At only 26 minutes in length it was a supremely enjoyable blast of cutting-edge death metal. Tæther is, to say the least, a lot more ambitious, lasting over 70 minutes in length. In many ways this seems like a different band altogether.

With a Japanese folk horror theme that’s fleshed out across the playing time, Tæther expands on the band’s early technical death metal by including an expansive progressive atmospheric edge alongside it.

This is a surprisingly atmospheric album, containing, as it does, frequent atmospheric forays not only between the blistering death metal songs, but mainly during them too. Orchestral enhancements, piano additions and other extra instrumentation give The Ritual Aura a much wider sonic palette to paint with on Tæther.

Greater use of melodies and sharp solos also differentiate their latest work from their older material, and when this is combined with the symphonic elements…well, The Ritual Aura’s sound has blown up.

There’s an all-round atmospheric and progressive edge to Tæther that was barely hinted at in Laniakea, but is now presented fully formed and with great force. The Ritual Aura have stepped up their game in every imaginable way, and they’ve pulled it off a treat.

There’s still a savage brutality at the heart of the band though, and they still know how to tear things up when they want to. It’s just that this brutality is now layered with so many other ideas and musical styles and influences that the songs on Tæther are far more complex beasts than we’ve previously heard from the band.

It’s not just the scope of the music that’s been widened either; guest vocalists, including the use of clean vocals on some tracks, occasionally enhance the main singer’s growls and screams. These primary growls and screams are ably performed, sounding just as good as you would want for music like this.

The production is huge-sounding too and does the ambitious material justice. With such a forceful, multifaceted sound these days, the band needed a suitably impressive recording to go along with it, and this has been achieved.

Mix up The Faceless, Inanimate Existence, Obscura, Irreversible Mechanism and even a bit of Opeth, and you’ll still only have a vague idea of the wonders that Tæther holds.

This is a supremely ambitious release that the band have delivered. I was not expecting them to come up with anything like this for their second album, and they’ve floored and impressed me in equal measure. It’s great to see a band develop and progress their music in a huge way such as this, especially when they end up doing it as well as they have done here.