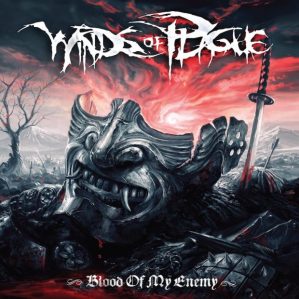 Winds of Plague are a deathcore band from the US and this is their fifth album.

Winds of Plague aren’t your average deathcore band, I’m very pleased to tell you. Here’s a band that have kept the core brutality of the style intact, while spreading their wings with symphonic/orchestral elements and bursts of melodic aggression.

Blood of My Enemy is heavy and brutal in all of the ways that you’d want from a modern death metal album. The -core side of their sound sees them incorporate plenty of catchy grooves and menacing chugs into their aural carnage, complemented by a production that’s as thick and beefy as this style demands. Metalcore elements stand out amidst the blast beats, providing a contemporary feel, showing that this is far from a pure death metal band, but that’s definitely an okay thing in this context.

Keyboards and other orchestration are used creatively and wisely, enhancing the band’s music and taking the material here to another level entirely. Combined with the band’s songwriting skills the end result is a very catchy and memorable album. If you enjoy music that combines modern deathcore, blistering death metal, anthemic metalcore, and atmospheric pomp, then this is for you.

For fans of Carnifex, Behemoth, Thy Art Is Murder, Hour of Penance, The Kennedy Veil, Fleshgod Apocalypse, Inanimate Existence, The Ritual Aura, etc.

One thought on “Winds of Plague – Blood of My Enemy (Review)”