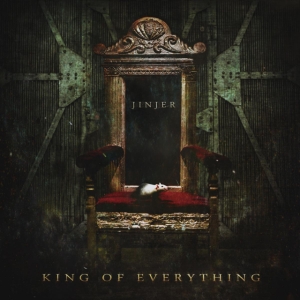 Jinjer are a metal band from the Ukraine, and this is their third album.

That’s putting it too simply, though; in reality, Jinjer have managed to produce a complex and diverse album that has a whole lot more going on than you might expect for a band that’s labelled as this one is.

King of Everything is quite a bit different than a lot of bands that operate in a similar setting, as the progressive and technical metal influences that Jinjer employ in their music broaden their horizons and musical options considerably.

As such, this is modern and technically-minded; in addition to the usual groove-based riffs you would expect, the songs range widely between this, faster brutality and more emotive qualities. Sometimes simple, sometimes technically complex; the music does more than is usual for a style like this and it’s telling that Jinjer are clearly above and beyond what most of their so-called peers are capable of right from the get-go.

The singer has an extremely powerful voice that she uses to great effect throughout the album. Like the music, she has a good range and uses her voice in a diverse and rewarding manner. Melodic cleans war with harsh growls and screams as the music congeals around her like a force of nature.

The combination of heightened aggression, melodic know-how and added progressive depth really does hit the spot nicely. It’s like they’ve taken the generic groove metal template and thought, “y’know what? This isn’t good enough. We can do better!”

And they have. Much better.

Any fan of modern aggressive music should check this out.

One thought on “Jinjer – King of Everything (Review)”