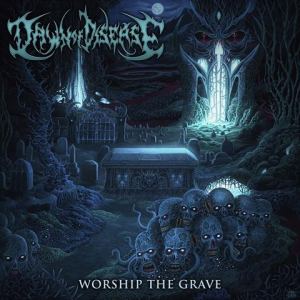 This is the third album from Dawn of Disease, a German death metal band.

Dawn of Disease seem to have honed their songwriting skills and are now channelling the spirit of 90s song-based death metal. It’s catchy, memorable and there’s more than a few twisting melodies and riffs that will stick in your head long after it’s stopped playing.

There’s definitely a Swedish death metal influence to Worship the Grave, but there’s more than just that going on here. The melodic death metal sound is also well and truly represented in their music too, alongside a touch of the Floridian scene here and there. The band use these influences well, resulting in a strong collection of catchy and well-written songs. I’d say this is a cross between bands like Dismember, Grave, Morbid Angel, In Flames, (old), and Kataklysm.

With all of this musical competence and muscle on show, the band have chosen to wrap it in a very powerful and clear production, which does them a lot of favours as everything they do comes through strongly due to this.

And what of the singer? Professionally-delivered growls that are nicely deep without being completely illegible, that’s what. He also acts as a brutal focal point to the music and adds a layer of roughness to the band’s streamlined aggression.

I really enjoyed Worship the Grave. The combination of proficient songwriting, a crisp, punchy sound, engaging melodies and catchy riffs has made a very good impression.

Listen up, and listen well.

One thought on “Dawn of Disease – Worship the Grave (Review)”